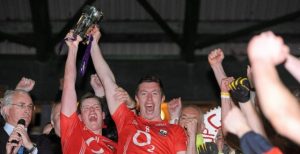 They led for almost the entire period of normal time but a late Kerry fightback took the game to extra-time, with Niall O’Shea’s brilliant long range point levelling things up for the Kingdom. Cork had been 1-5 to 0-5 ahead at the break, with Donal Óg Hodnett’s goal crucial in a first half in which Cork played with the breeze. The Rebels maintained this lead for most of the second half before the late Kerry revival, copperfastened so spectacularly by O’Shea’s late blockbuster, forced the extra period.

Cork powered ahead again shortly after the resumption though, moving into a six point lead after Luke Connolly’s goal. Remarkably though, Kerry battled back from the brink again, with Chris Brady’s penalty anchoring their revival. The final few minutes which followed were extremely exciting, as Kerry fought to rescue, for the second time, what had looked to be a terminal situation. They managed to get within one but just ran out of time in the end as Cork clung on by the minimum to retain their U21 provincial crown.

MUNSTER UNDER-21 FINAL/Kerry 1-14 Cork 2-12: MUNSTER CHAMPIONS Cork needed extra-time to see off Kerry in front of a crowd of 5,318 at the Austin Stack Park, Tralee, last night.

It appeared very much a case of déjà vu after five minutes when Cork threatened to repeat last year’s mauling of Kerry at Páirc Uí Rinn as they raced 0-4 to 0-0. Cork were winning every break around midfield and their inside line of Brian Hurley, Luke Connelly and Donal Óg Hodnett had the legs on their opponents with points from Hurley (2) and one each from Connolly and corner back Alan Cronin, leaving the Kingdom in a daze.

However once Kerry settled with James Walsh winning ball at midfield, the Kerry inside duo of Kieran Hurley and Conor Cox began to torment Cork and suddenly Kerry were back in the contest. They were level by the 20th minute thanks to four unanswered points from Conor Cox with three (two frees) and Hurley. The crucial goal of the half came in the 28th minute when Luke Connolly floated in a free to the square and when the ball broke, Hodnett finished to the Kerry net as Cork led 1-5 to 0-5 at the interval.

Cork did their best to kick the game away as Kerry rallied with Walsh outstanding. Points from Cox (3) and one from the sideline from Shane Carroll left the minimum between the sides with seven minutes left. Brian Hurley then appeared to have kicked the insurance point for Cork in the 56th minute but Kerry forced extra time with points from Cox and O’Carroll.

It appeared Kerry were down and out in the first period as Cork added 1-3 to 0-0 with the goal coming from Luke Connolly. However a Kerry goal from a penalty by Chris Brady and points from substitutes Eanna O’Connor and Gavin O’Grady closed the gap to one point but Cork prevailed to win back-to-back titles.

By Fintan O’Toole for the Irish Examiner newspaper

They needed more than 80 minutes of action to get over the line but ultimately Cork’s trip to Austin Stack Park in Tralee proved fruitful last night as they retained their Cadbury’s Munster U21 football title with a narrow success over Kerry. A game that bristled with potential failed to scale any heights for long stages and was marred by the fussy officiating of referee Keith O’Brien.

The encounter was redeemed for the 5,318 patrons present by the dramatic finale to normal time, when Kerry hauled Cork back for a draw. In the additional periods Cork eradicated the sluggishness of their play in the closing stages of normal time and a powerful opening burst to extra-time when they registered 1-3 without reply proved pivotal to their success. Cork were forced to overcome a series of setbacks with influential players like Tomas Clancy and John O’Rourke limping off with injuries while they also were bizarrely nearly reduced to 14 men at one stage in extra-time. Cork defender John Cronin was shown a red card during extra-time after it was incorrectly deemed he had been booked for a second time but after walking to the sideline, the Lisgoold player was then summoned back to the action after the referee realised his mistake.

The momentum lay firmly with Kerry entering extra-time after their stirring revival in normal time as a stunning point from a sideline by wing-forward Shane O’Carroll tied the teams. But despite being cheered by vociferous home support it was Cork who emerged for extra-time in vibrant fashion. Captain Donal Óg Hodnett kick-started their scoring spree by pointing after a tremendous run and then substitute Dan McEoin, who made a vital contribution when introduced, grabbed another stylish point. In the 64th minute they then grabbed a key goal when Luke Connolly finished coolly to the net after a fine team move involving Jamie Wall, O’Rourke and Brian Hurley, who was in outstanding form all night. When Rory Deane fisted over a point in the 67 minute, Cork were 2-11 to 0-11 to the good at the midway juncture.

Kerry mounted a brilliant recovery that ensured Cork could never relax. Substitutes Eanna O’Connor and Gavin O’Grady made a big impression in improving the fortunes of the Kerry attack and they were handed a lifeline when the referee adjudged Stephen O’Brien to have been grounded close to goal in the 76th minute by the Cork defence. Chris Brady held his nerve to dispatch the ball to the net. Cork produced a telling response when McEoin lofted the ball between the posts during a raid forward. Late points by O’Connor and O’Grady cut the gap to the minimum and despite Kerry’s frantic attempts to find a levelling score, Cork held firm and were grateful to a timely interception by Cronin as the Kingdom attacked late on.

Cork had made a blinding start to the game as they sprinted into a 0-4 to 0-0 lead. Backed by a strong breeze, they strung together some fine passages of play, with Hurley particularly proficient in their attacks. Then, two minutes before half-time Cork pounced for a critical score that had a significant bearing on the course of the game. Luke Connolly sized up a long-range free from the left wing but his effort to kick a point came unstuck as the ball dropped short. Yet the indecision of the Kerry defence proved costly and was in contrast to the alertness of Donal Óg Hodnett, who challenged for possession in the air and pounced as the ball hit the ground to stab a left-footed shot past Paul O’Sullivan.

However Kerry never allowed their opponents to get too far ahead. Conor Cox spearheaded their fight as he troubled the Cork rearguard when fed possession during the first half. His place kicking left him down on occasions but in general he was busy and inventive in the full-forward area, and was Kerry’s biggest attacking threat as he amassed 0-8 in total during the match. By half-time, Kerry were only adrift 1-5 to 0-5 and in the second half, they began to gain control with midfielders James Walsh and Darragh O’Sullivan having terrific games. Defenders Mark Griffin and Pa Kilkenny were others to catch the eye and while they trailed by 1-8 to 0-9 entering the closing stages, Kerry kept calm to tie the game through points by Cox and O’Carroll. They looked the most likely victors at that point but Cork reorganised well before extra-time and their strong start proved significant in propelling them to an All-Ireland semi-final meeting with Dublin on Saturday April 21.

Kraft Foods recently announced the renewal of the Cadbury sponsorship of the GAA U21 Football Championship for another 3 years. The renewal builds on a successful 7 year partnership between Cadbury and the GAA which has seen the Championship go from strength to strength with greater TV coverage now than ever before and over 20,000 fans attending the final in Croke Park last year. This success has been built on innovative sponsorship activation especially in the area of new media which has seen an ever increasing engaged audience of GAA fans participate in the Championship discussion.

Speaking at the launch, Shane Guest, Kraft Foods Ireland said “We are delighted to be able to renew our sponsorship with the GAA and look forward to building on the success of the past 7 years. The skill and determination these young footballers demonstrate continues to astound us and we look forward to another exciting championship in 2012”.

Speaking at the launch Uachtarán Chumann Lúthchleas Gael Críostóir Ó Cuana said:  “The GAA U21 Football Championship has served as an important stepping stone for many of the players who progress to reach the highest level of our game and those who follow the grade closely have been treated to some excellent campaigns in recent seasons. To that end we are delighted to acknowledge the three year extension to our arrangement with Cadbury. Their support and innovation has helped bring great energy to the competition in recent seasons and I look forward to the continuation of what has been a fruitful partnership ahead of what promises to be another intriguing championship.”

Last year’s championship culminated in a great spectacle which saw over 20,000 attendants in Croke Park watch Galway earn a hard fought win against Ulster Champions Cavan and this year the Cadbury GAA Facebook Community have again identified Cavan and Galway as the two counties most likely to battle it out for the All Ireland title. The Cadbury GAA under 21 Football Championship is widely regarded as an important stepping stone to senior success with a large number of Under 21 players already starring for their senior county teams in the National League and in previous Senior All Ireland Championships. Amongst those is 2010 Cadbury Hero of the Future Rory O’Carroll who starred at full back as Dublin claimed the All-Ireland for the first time since 1995. Previous Cadbury Hero of the Future award winners; Colm O’Neill, (HOTF 2009), Killian Young (2008) and Fintan Goold’s (HOTF 2007) have also gone on to claim All-Ireland Senior success.

For the 2012 season, Cadbury will continue to build on its digital platforms for its dedicated online community who follow every move of the Championship throughout the season. With established social media platforms including

GAA fans from every corner of the globe can contribute with comments, photos and videos and of course vote for the 2011 Cadbury Hero of the Future.