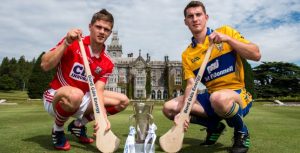 Munster U21 Final: Three in a row for Clare

Clare’s dominance of the U21 grade continued on Wednesday night in Ennis as they swept to a third consecutive Munster title in a row with a hugely convincing 15-point victory over Cork. The win, Clare’s fourth in the province in six seasons, means their bid for three All-Ireland U21 titles in a row remains firmly intact. They will face Ulster champions Antrim in the All-Ireland semi-final on August 23.

It was a totally dominant win which never looked in doubt. Clare took control in the first half, and were 11 points ahead by the 21st minute. Cork eventually composed themselves, but they were never able to threaten Clare on the board. Clare took control of the game right from the start in Cusack Park, firing over after a few seconds through Aaron Cunningham. Further points followed swiftly, with Tony Kelly, Bobby Duggan and Peter Duggan on the scoresheet, and Clare led 0-9 to 0-1 with 20 minutes gone.

They then broke through for a goal to cement their total dominance on the scoreboard. A rapid break up the field ended with Shane O’Donnell surging through on the Cork goal and smashing the sliotar to the roof of the net to put the home side 11 clear. Cork rallied somewhat before the end of the half with points from Mark Sugrue and Rob O’Shea, but Clare finished the half as they started it, with Bobby Duggan firing over after some brilliant work from Eoin Enright.

Clare were 1-15 to 0-5 ahead at the break, and for Cork to have any chance of getting back into the game, they needed a goal early in the second half. They managed one on 42 minutes. Alan Cadogan forced a superb save from Keith Hogan, and a scramble ensued when the resulting ’65’ was pumped towards the Cork goal. Anthony Spillane showed great determination and guile to win possession amid a mass of Clare bodies, and he kicked to the net past Hogan.

The gap remained 11 at that stage though, and when Clare responded immediately with two points, including one fine effort from the outstanding Colm Galvin, they led by 13 points as the game entered the final quarter. The final 15 minutes were fairly pedestrian, as Clare coasted to the win. They kept the scoreboard ticking over in the closing stages, with Galvin adding to his tally and sealing a majestic display, and Bobby Duggan taking his individual haul to 0-10.
***
Scorers for Clare: B Duggan 0-10 (6f, 0-1 ’65′), A Cunningham 0-4, S O’Donnell 1-0, T Kelly 0-3 (1 ’65’), Colm Galvin 0-3, D Reidy 0-3, Peter Duggan 0-2, Shane Gleeson 0-2, C O’Connell 0-1 (1f)

Supporters can avail of a pre-purchase discount on adult tickets of €5 if they purchase up to 3 hours in advance of the game, i.e. €10 instead of €15. Students and OAP tickets remain unchanged at €10 while all under 16s are free.

Tickets available for purchase at gaa.tickets.ie, Centra and Supervalu outlets.