Tyrone defeated Tipperary by 0-19 to 0-7 in round 3B of the All Ireland Football Qualifiers on Saturday July 18th at Semple Stadium Thurles.

FT in Thurles and Tyrone have powered into Round 4B after a dominant second-half showing. http://t.co/lpmHaTvVaQ pic.twitter.com/082xXl2Stb

By Jackie Cahill at Semple Stadium for RTE.ie

Tyrone demolished Tipperary by 12 points in this afternoon’s All-Ireland SFC round 3B qualifier, running out 0-19 to 0-07 winners in front of 4,620 spectators at Semple Stadium. Mickey Harte’s Red Hands ran riot in the second half, outscoring the hosts by 0-12 to 0-01.

Tyrone led by 0-07 to 0-06 at the break as tempers boiled over on the stroke of half-time, with players from both sides becoming involved in a number of scuffles. And it turned into a dreadful second half for Tipp as they fell to a big defeat.

In a game that was billed as a grudge match following the controversial All-Ireland Under-21 final between the counties, the Premier County had seven players booked, one black carded and another sent off. Liam Casey was handed a red card in the 56th minute, just two minutes after coming on, for a stamp on Colm Cavanagh. Experienced defender Ciaran McDonald was black-carded soon after as the Tipp challenge crumbled.

That exchange of pleasantries before half-time seemed to benefit Tyrone more as they turned up the heat in the second half, with Tipp desperately lacking inspiration all over the pitch. Despite playing against the breeze, Tyrone romped to a comfortable win to book their place in round 4B. Free-takers Darren McCurry and Connor McAliskey finished with five points each but the Cavanagh brothers, Sean and Colm, were both excellent, along with Peter Harte.

For Tipp, this is a major setback after running Kerry to six points in the Munster semi-final, followed up by a 21-point victory over Louth last weekend. Tyrone flattered to deceive against Meath but this was a much-improved display from the Ulster men.
They were 0-07 to 0-06 clear at half-time before unloading with ferocity on Tipp in the second half.

The hosts managed just one point in the entire second half – a 66th minute Kevin O’Halloran free – as Tyrone turned up the heat. And yet the sides were level at 0-04 apiece by the 19th minute as Tipp recovered from falling three points down to level.

O’Halloran was in good form from placed balls but Tipp were finding it difficult to break through the massed Tyrone ranks. Mickey Harte’s men packed bodies behind the ball and broke with pace when they had the opportunities to do so. And once they got into their stride in the second half, they were simply too good for Division 3 opponents.

Report – @TyroneGAALive utterly blitzed a hugely disappointing @TipperaryGAA in the second half in Thurles: http://t.co/1zGm5LMwmX #GAA

Who'll reach the Round 4B Football Qualifiers? We preview Tipperary vs Tyrone » http://t.co/Irv1w2PQzH #GAA #TIPPvTYR pic.twitter.com/vidUrK821W

The Tipperary Senior Football team to play Tyrone, in the GAA Football All-Ireland Senior Championship Round 3B, in Semple Stadium, on Saturday next July 18th at 3pm has been announced by manager Peter Creedon. It shows one change to the side announced for last week’s fixture against Louth with Martin Dunne from Moyle Rovers getting the nod at number 9 partnering Colin O’Riordan.

The team for Saturday is as follows – 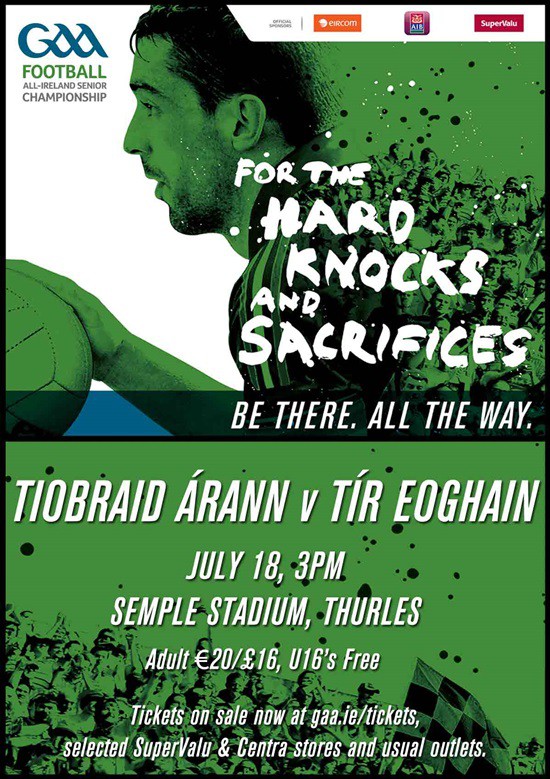