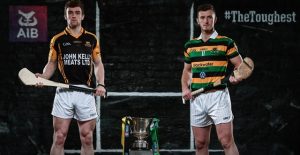 Tony Kelly was at his brilliant best as Ballyea were crowned AIB Munster senior club hurling champions this afternoon. Clare’s 2013 Hurler of the Year crowned a five-star display with five points from play as Ballyea advanced to an All-Ireland semi-final against Galway outfit St Thomas’s in February.

Ballyea were inspired as they downed Cork opponents Glen Rovers, who were appearing in a Munster final for the first time in 40 years. In their very first provincial final appearance, Ballyea showed fine composure in the second half to add more silverware following their breakthrough county success recently.

On a bitterly cold afternoon in Thurles, Ballyea had established a nine-point lead, 1-10 to 0-4, at half-time. But they were rocked by two Conor Dorris goals early in the second half as Rovers roared back to within three points.

With 11 minutes left, Rovers were just three behind again when Cork senior star Patrick Horgan landed a ’65 but Ballyea finished excellently, with leading scorer Niall Deasy accurate on placed balls and from play throughout. In front of 4,593 spectators, the sides were level three times in the opening 12 minutes before Ballyea put some daylight between them.

Pearse Lillis, one of the Clare senior footballers in the Ballyea side, latched onto Gearoid O’Connell’s pass and left the Rovers defence for dead before cracking home a 13th minute goal. That assist wasn’t the only good piece of work from O’Connell all day, as the centre back also collected three points from play in a dominant outing.

Wearing number 5, but operating in the central position, O’Connell was immense and with that excellent half-back line platform to work from, Ballyea made hay. Kelly was everywhere, full of tricks and impudent flicks on a landmark day for his club.

Deasy top-scored and there was a brace of points each for Pat Joe Connolly and Damien Burke, in what was very much a team effort from Ballyea. And yet their nerves jangled with Dorris pounced on defensive uncertainty for goals in the 32nd and 37th minutes.

With their tails finally up, Rovers had a whiff of a fourth-ever provincial title but Ballyea would not be denied their first. All-Star football nominee Gary Brennan became a more prominent figure as Ballyea drove on. And in the final 11 minutes of playing time, plus the extra three minutes, Ballyea outscored Rovers by 0-7 to 0-2.

Ticket Information
Adult: €15.00
Concession (Student/OAP): Receive €5.00 rebate on full price tickets at the venue on the day of the fixture PRIOR to entry with valid I.D.
Juveniles (Under 16 years of Age): Free of Charge

Tickets are available to purchase in advance at participating Centra & Supervalu outlets.