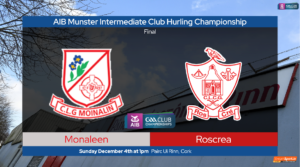 Clinical O’Dwyer points the way to Munster glory for Monaleen

The Monaleen centre-forward, substituted to a sizable reception deep in second half stoppages, finished proceedings with 0-15 written beside his name. Eleven of those were dead-ball efforts.

It was O’Dwyer who was at the heart of Monaleen’s clinical second-half start that ultimately proved the game’s defining period.

Ahead by 0-11 to 0-10 at the break, the Limerick champions outgunned their opponents 0-7 to 0-1 in the 10 minutes after half-time. It was a burst that put seven between the sides. It was a burst where O’Dwyer converted five frees. Half-back Ronan Lyons and full-forward Ed Doyle were also on the mark as the Limerick lads stretched their legs and their lead.

Doyle was to be a pivotal actor in this provincial deicder later in the second period. Roscrea fought and fought to peg back the seven-point deficit. A minute from the hour mark, the Tipperary champions, led by Alan Tynan and sharpshooter Luke Cashin, were back within five, 0-22 to 0-17.

Then arrived a Doyle goal to both kill the Roscrea revival and guarantee Monaleen an All-Ireland semi-final appearance against either Trim of Meath or Wicklow’s Bray Emmets.

A goal that seals the title for Monaleen.

The first half was a funny one. Contradictory too.

A dozen wides had been split evenly between the sides as early as the 13th minute. Both radars had had a Sunday lie-in. The overworked umpires were flat out waving.

The 12 wides dwarfed the four points registered inside these opening 13 minutes, also split evenly between the sides. We also had a Monaleen saved goal chance. The target was as elusive as it was evasive.

And then, like the flick of a light switch, the floodgates opened. Scores rained in from all manner of angles and distances. A drought to a deluge. 12 points, again split evenly, in 10 minutes. A 10-minute period that contained not a single wide.

The opening period was level eight times. It finished with Monaleen one ahead, 0-11 to 0-10.

O’Dwyer was the game’s top scorer breaking for a half-time cup of tea. He clipped four frees and one less from play. His corner-forward teammate Donnacha Ó Dálaigh was also making a nuisance of himself. He twice rose white flags.

At the other end, Luke Cashin had five to his name. Four from the dead-ball. Evan Fitzpatrick and Conor Sheedy both contributed a pair.

But Roscrea lost a yard of pace on their opponents at the beginning of the second half. That yard became a couple of metres. The gap eventually became too big to bridge.

A year after being relegated from the Limerick senior ranks, Monaleen have bounced back with county and Munster titles. They now go after an All-Ireland.

Sunday’s match programme will be available at a cost of 3 euro. 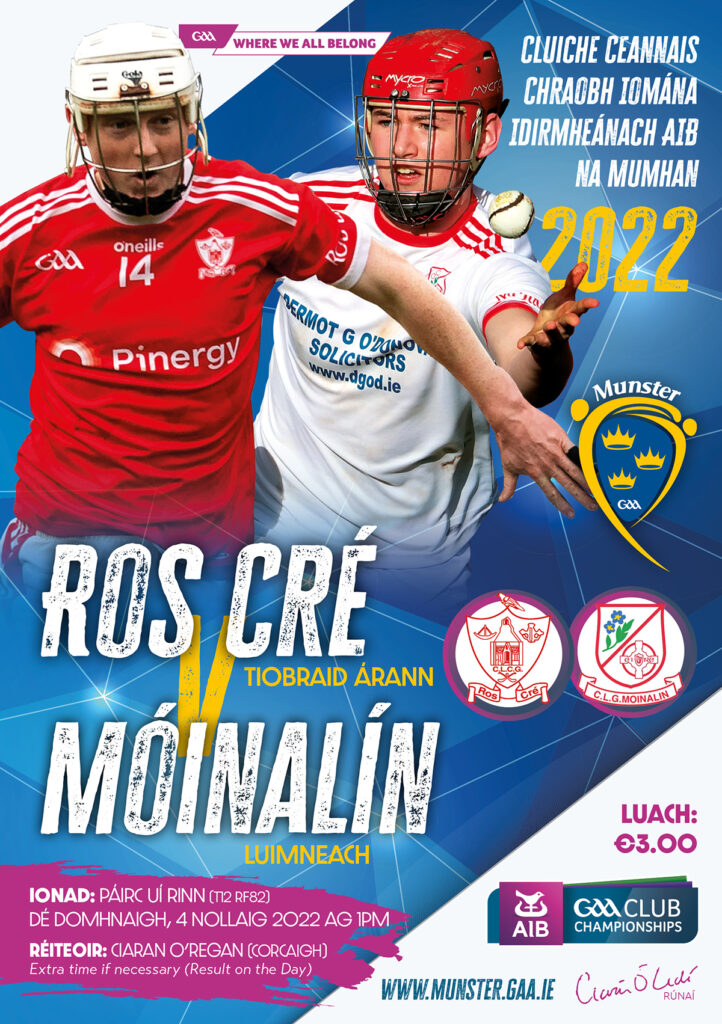