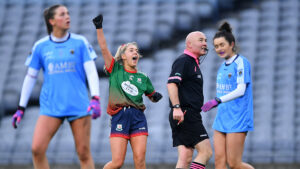 Grace Shannon struck a brace of goals to propel Longford Slashers towards an emphatic victory against Mullinahone in the currentaccount.ie All-Ireland Intermediate Club Championship decider at Croke Park on Saturday.

This was an historic triumph at GAA HQ as Slashers became the first team from the O’Farrell County to claim national success at adult club level in Ladies football.

Slashers had enjoyed a dream start as team captain Aisling Cosgrove poked the ball home for a fourth-minute goal following a precise pass from Kara Shannon.

While this was an early set-back for Mullinahone, the Munster champions did get up and running with two frees courtesy of Lorraine O’Shea. The tie remained delicately poised as a result of traded points between Slashers wing-back Clare Farrell and opposition attacker Aoibhe O’Shea (sister of Lorraine), before the Longford side created additional daylight through Jessica Barry and marauding defender Orla Nevin.

There was even more reason for Slashers to be cheerful on 23 minutes, when a speculative effort from Grace Shannon crept into the back of the Mullinahone net.

The impressive Nevin subsequently broke forward for a second point and while Lorraine O’Shea knocked over another free at the far end of the Jones’ Road venue, Slashers ultimately led 2-4 to 0-4 at the interval.

This six-point gap remained intact after dead-ball specialists Lorraine O’Shea and Barry cancelled out each other on the resumption, but the Longford and Leinster supremos pulled further in front with a mini scoring blitz.

Preceding a point by wing-forward Kyana Lee, Grace Shannon got on the end of an intricate team move to clinically secure her second goal of the contest.

Although Aoibhe O’Shea interrupted this sequence with a fine point, unanswered scores from sisters Kate (two) and Grace Shannon left Mullinahone with too much of a mountain to climb.

Moving into the final-quarter, Aoibhe O’Shea and Kate Shannon swapped points in advance of Nevin rattling the net in ruthless fashion.

THE honour of becoming the first teams to line out in an All-Ireland Ladies club football Final at Croke Park will fall to Longford Slashers and their opponents from Tipperary, Mullinahone.

Two excellent teams will contest the 2022 currentaccount.ie All-Ireland Intermediate decider at the famous venue – and this is uncharted territory for both.

Longford Slashers will become the very first team from Longford to contest an All-Ireland Ladies club football decider – with Mullinahone making an impressive step-up from the Junior ranks to reach Saturday’s showpiece.

It was just last February when Mullinahone appeared in an All-Ireland Junior decider but unfortunately from their point of view, they came up short against Dublin opponents St Judes.

To recover from that Final heartbreak and go all the way to an Intermediate Final just ten months later speaks volumes for the determination and character that exists within the panel.

Mullinahone will bring a massive hunger to the game but that will be matched by Longford Slashers, an excellent team and no strangers to adversity themselves.

In their Leinster Final against Meath opponents Skryne, Slashers conceded three early goals and looked to be in real trouble.

But Slashers, extremely well-organised and hard-working, set about their task with aplomb and worked their way back into contention.

In the recent All-Ireland semi-final, Slashers welcomed Mayo opponents Charlestown to Michael Fay Park.
Deirdre Doherty was the big danger for Charlestown and in superb form once again, kicking all ten points for the Westerners.

But in a keenly-contested tie, Slashers had enough wherewithal to get the job done, earning a 1-11 to 0-10 victory and an historic spot at Croke Park.

Kate Shannon, a real tower of strength, collected 1-2 for Slashers and Barry impressed once again with four points, including three frees.

Mullinahone, meanwhile, were digging out a semi-final victory after extra-time against Fermanagh opponents Derrygonnelly Harps.

This was a thrilling game that saw the Munster champions claim a crucial extra-time goal from Lorraine O’Shea, daughter of team manager, Mary, to eventually help clinch the win.

Mullinahone, hoping to emulate the feats of Brian Borus in 2009 by landing the Intermediate crown, are very much like their opponents – a finely-tuned outfit boasting a lovely blend of youth and experience.
Lorraine O’Shea and sister, Aoibhe, have been in excellent form of late and Kilkenny camogie star Denise Gaule remains as influential as ever within the squad.

It’s all to play for in this currentaccount.ie All-Ireland Intermediate club Final – and the winners will have the honour of being the first team to savour national Ladies Club football glory at Croke Park.

Longford Slashers are unchanged for this one but Mullinahone have two changes to the team that lined out from the start against Derrygonnelly, with Rosa White and Ailish Langton listed to start ahead of Gaule and Michaela Kenneally.