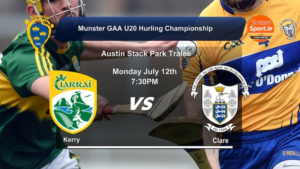 Clare defeated Kerry by 2-20 to 0-15 in the Munster Under 20 Hurling Championship Quarter-Final on Monday July 12th at Austin Stack Park Tralee.

Clare had their expected victory over Kerry at Austin Stack Park last night but Kerry had the encouragement of an improved second-half performance to narrow the gap to 11 points.

Kerry outscored Clare 0-10 to 0-5 in a second period where players like Colin Walsh, Dáire Nolan, Sean Sheehan, Tomás Ó hAiniféin, and substitute Darragh Reen were more than a match for their more vaunted opponents.

Clare were on top from the very outset winning all the physical battles and in Shane Punch and Diarmuid Cahill, the Clare full-forward line were too hot for an overworked Kerry defence.

Clare raced 0-9 to 0-3 in front by the first-half water break with Punch scoring five points, while the elusive Cahill was tormenting Kerry with two points. Conor Hegarty and William Halpin added one apiece.

Kerry, who fielded basically an U19 side, were trying hard with Kevin Goulding, Walsh, Mikey Clifford, and Nathan Guerin doing their best but only Dylan Moriarty with two points and a superb Guerin point could find the target.

Clare struck for two goals in the second quarter from Oisin O’Donnell, after Shane Punch set him up, and then Punch saw his free ending up in the net via the inside of the post.

It could have been worse for Kerry but for keeper Dara Quinlan who made three point-blank saves from Cahill, Punch, and Hegarty.

Clare led 2-15 to 0-5 at half time but Kerry resumed a transformed side and dominated for long periods with Walsh outstanding. Clare only added three points in the third quarter as Moriarty added three for Kerry.

Kerry won the final quarter 0-7 to 0-2 with Reen firing over two super points. While Kerry will take pride in that second-half effort, Clare have work to do if they want to advance in the championship.

Clare U20 Hurling team to play Kerry on Monday nexthttps://t.co/YbF9PWlhu2

There are 12 clubs represented in the starting 15 with Clare senior panellist Paddy Donnellan named as team Captain. Clonlara have three on the starting lineup whilst Clarecastle have two whilst Smith O Briens, Feakle, St Josephs Doora Barefield, Crusheen, Ruan, Inagh/Kilnamona, Tulla, Parteen, Broadford have one each.