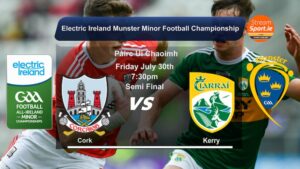 Kerry’s eight-year stranglehold on the Munster minor football championship is no more, Cork scoring a one-point win in this evening’s provincial semi-final to dump out the Kingdom and, in the process, book their place in the decider on Wednesday week.

Kerry, having trailed by five with 10 minutes remaining, came desperately close to forcing extra-time as James Costello’s charges narrowed the gap to the minimum coming down the stretch and were presented with a chance to equalise matters three minutes into second-half stoppages but Dylan Roche missed a close-range free to ensure Cork held on.

Cork will have been disappointed with how they let their opponents back into contention having led by 1-13 to 1-6 at the second water break. Mistakes were plentiful on either side as cheap turnovers and poor passes ruled the hour.

This result means Cork, for the first time since 2013, have beaten Kerry in minor and U20 championship fixtures in the same year.

Cork, despite playing into the teeth of a strong wind in the opening half, held a commanding 1-9 to 0-6 interval lead. And, in truth, their half-time advantage should have been greater as Michael O’Brien’s side tallied seven first-half wides, while also dropping short a further two efforts.

Cork’s two outstanding forwards of the first-half, Niall Kelly and Hugh O’Connor, were the first two boys in red on the board to send the hosts into an early lead.

There followed, however, Kerry’s most productive spell of the half, landing four without reply in a five-minute spell – Eoghan Hassett (0-2 frees), Jack Clifford, and Luke Crowley the providers – to go from two behind to two in front by the eighth minute.

The Kingdom would manage only two further white flags between there and the call for half-time, Cork’s overall superiority meaning the visitors were unable to create a meaningful flow of chances to capitalise on the elements.

A Hugh O’Connor free and Jack O’Neill point brought the hosts back on level terms, with Niall Kelly’s second of the evening shoving Cork in front – 0-5 to 0-4 – just before the first water break.

They continued to put distance between themselves and their opponents upon the resumption of play, a Michael McSweeney goal at the end of a 1-3 unanswered burst propelling the home side seven in front on 29 minutes.

.@OfficialCorkGAA lead @Kerry_Official by 7 at the second half water break in the Electric Ireland Munster Minor Football Championship Semi-Final thanks in no small part to this goal by Michael McSweeney just before Half Time pic.twitter.com/DcvJ5dBnGE

Kerry halved the six-point interval deficit when securing a soft goal through Hassett at the beginning of the second half.

Cork, to their credit, issued an impressive response, with Jack O’Neill (0-2), Kelly, and O’Connor (free) opening up a gap of seven once more at the second water break.

Eoghan Hassett's goal for @Kerry_Official against @OfficialCorkGAA in the Electric Ireland Munster Minor Football Championship Semi-Final brought the Kingdom back in to the game just after HT pic.twitter.com/YAsJysLwGy

Six Hassett points pulled Kerry right back into the mix but they were unable to find an equalising score. Their nine-in-a-row Munster bid is over.

No tickets for tonight’s Munster Minor Football S-Finals have been returned by the counties involved.
As a result, there are no tickets for public sale & the games are sold out.