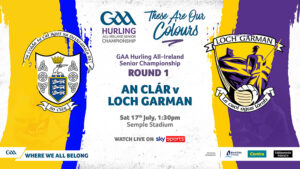 Clare defeated Wexford by 2-25 to 2-22 in Round 1 of the All-Ireland Senior Hurling Championship Qualifiers on Saturday July 17th at Semple Stadium Thurles.

Clare completed their third knock-out victory over Wexford in four seasons in Semple Stadium, Thurles this afternoon to advance to the last eight of the All-Ireland series.

Defying the sweltering conditions, Brian Lohan’s side hit the ground sprinting, helped by a ninth minute Cathal Malone goal, to carve out an eleven point cushion by the midway mark of the opening half at 1-11 to 0-3. However, Wexford finally steadying their ship after such a haphazard start, they would admirably finish the opening half with the last five points and restarted with three more to slash the arrears to just two at 1-15 to 1-13 by the 40th minute.

It would tee up an intriguing end-to-end final 30 minutes that became increasingly anxious as the sides traded blows in such draining conditions. Crucially however, once Clare bounced back off the ropes with four of their own through Tony Kelly (2), Aidan McCarthy and David Reidy at 1-19 to 1-13, three points would be as close as Wexford would come to the leaders as the clock ticked inexorably down.

With Wexford desperately searching for a goal, it was Clare who actually raided for one in injury-tme when substitute Gary Cooney flicked a Tony Kelly delivery to the net for what was essentially an insurance score. Lee Chin did subsequently raise a green flag after Conor McDonald’s initial effort was superbly saved by goalkeeper Eibhear Quilligan, but it was to be the last act of the latest dramatic contest between this pair.

In the end, Clare’s blistering start proved Wexford’s undoing as the winners responded to Conor McDonald’s opener with a purple patch 1-7 in just 11 minutes. Gathering a puck-out, Cathal Malone raced through to find the roof of the net in what would be a peerless display from the Sixmilebridge player who along with Rory Hayes David Reidy were vital cogs in Clare’s second championship win.

Lee Chin and Cathal Dunbar provided Wexford’s main threat but they were always chasing the game after that horror start despite an inspirational Diarmuid O’Keeffe goal in the 22nd minute.

It was also a second successive championship win for Brian Lohan over his former All-Ireland winning team-mate Davy Fitzgerald as Clare await their next opponent in Monday’s Round 2 Qualifier draw.

🗣️"Great spirit from our lads"@GaaClare manager Brian Lohan gives his thoughts after the Banner County's win over Wexford! pic.twitter.com/ANHYo9V9lz

Great finish in the back of the net from Cathal Malone for @GaaClare v @OfficialWexGAA in Round 1 of the All Ireland Senior Hurling Championship #GAANOW pic.twitter.com/idQPPQVHN8

Diarmuid O'Keeffe gets a GOAL for @OfficialWexGAA v @GaaClare in Round 1 of the All Ireland Senior Hurling Championship Qualifiers #GAANOW pic.twitter.com/uPxfaQRsC2

"Aron Shanagher, I'm waiting for the day he explodes and gets three goals!"