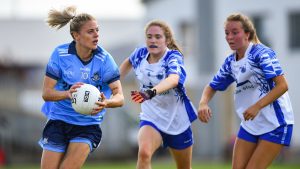 Despite the absence of team captain Sinead Aherne through injury, the attacking triumvirate of Nicole Owens, Niamh McEvoy and Lyndsey Davey ensured victory was never in doubt for the Leinster outfit. Abbeyside’s Maria Delahunty led by example throughout for Waterford, whose focus now switches to a crunch encounter away to Monaghan next weekend.

Starting with 11 of the team that secured the Brendan Martin Cup at Cork’s expense last September, the three in-a-row chasing Sky Blues signalled their intent during a fast-paced opening to the action.

Following an early point for Davey, Owens released St Sylvester’s club-mate McEvoy for a clinical fifth-minute goal. The centre-forward also raised a white flag at the end of a subsequent attack, before Aileen Wall and Maria Delahunty brought the Deise challenge to life.

While full-forward Michelle Ryan was an also target, an earlier major for Davey left them five points behind, 2-2 to 0-3, at the end of the first-quarter. Their woes were further compounded when Owens raised another green flag for Mick Bohan’s charges.

Siobhan McGrath and Lauren Magee added points either side of this effort and a fourth Dublin goal inevitably arrived through McEvoy, when she got her second after 19 minutes.

Points from Owens and Noelle Healy bolstered their tally and while half-back Roisin Tobin kicked an excellent point for Waterford, the champions led 4-6 to 0-4 at the break.

A pointed Delahunty free gave Ciaran Curran’s side further hope on the resumption, only for Owens and McEvoy to respond in similar style at the far end.

Waterford never allowed their heads to drop, however, and were rewarded with a goal in the 41st-minute. After Sinead Goldrick was adjudged to have hauled down Eimear Fennell inside the square, Delahunty slotted the penalty beyond the reach of Ciara Trant.

Nevertheless, Dublin quickly reinforced their superiority courtesy of unanswered points from McEvoy, Davey and Owens. Delahunty and McEvoy traded scores inside the final-quarter, a juncture that saw Siobhan Woods contributing 0-2 off the bench.

A superb Fennell goal lifted the spirited of the Waterford faithful, but a ruthless Dublin had the final say through Davey’s late 1-1 salvo.

After recovering from a slow start, Dublin claimed an eighth successive Leinster title in comfortable fashion against Westmeath.

There was some collateral damage for the Sky Blues, however, as captain Sinead Aherne suffered a shoulder injury which rules her out of the game against Waterford in Portlaoise on Saturday. Oonagh Whyte scored two goals in the Leinster Final but is named on the bench for this one.

Whyte, however, wasn’t listed to start in the provincial decider either, before making a big impact when handed the chance to impress from the throw-in.

Waterford gave Cork plenty to think about in the Munster Final, before the Leesiders pulled away in the second half. The Déise may opt for containment in the early stages and see how far that takes them.