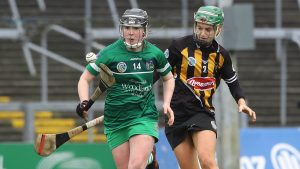 Kilkenny defeated Limerick by 4-23 to 1-13 in the Liberty Insurance Senior Camogie Championship on Saturday July 20th at John Lockes, Callan.

Kilkenny were irresistible as they confirmed their place in the Liberty Insurance All-Ireland Senior Camogie Semi-Finals on August 17th with a 4-23 to 1-13 triumph over Limerick at the John Lockes grounds in Callan.

There was some consolation for the beaten team as their place in the Quarter-Finals on August 3rd was rubberstamped by Galway’s defeat of Wexford in Bellefield. They were never in contention in this tie though as Katie Power, Denise Gaule and Michelle Quilty hit four points each for Kilkenny to lead by 0-16 to 0-6 at the interval.

It was stunning shooting by Ann Downey’s troops and Limerick had no answer, relying on four points from Niamh Mulcahy to retain some semblance of hope. That was removed within a minute of the restart however, as Anne Dalton struck for a goal, and it was plain sailing from there, Power, Quilty and Dalton pouncing for further majors before Rebecca Delee grabbed a consolation three-pointer for Limerick.