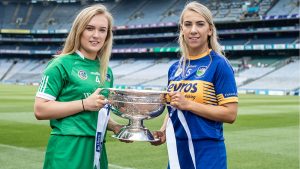 TIPPERARY’S experience of knockout Camogie showed as they ground out victory in the Liberty Insurance All-Ireland Senior Camogie Quarter-Final at Semple Stadium.

Cáit Devane shot seven points from placed balls, five in the second half, and Niamh Lillis’s side had built up enough of a lead to see out the game despite the sending off of an unlucky Ereena Fryday in the 52nd minute.

Fryday was shown a second yellow card by Ray Kelly when attempting to double on a sliotar in the air. She was completely unaware as Karen O’Leary nipped in on her blindside to intercept and receive a glancing blow for her bravery.

There was no hint that Limerick would reel in the deficit as they ran out of ideas in the second half however, though Declan Nash’s troops never stopped battling on their first appearance in the knockout stages for 14 years.

It all looked so good for the Shannonsiders early on, with Niamh Mulcahy on fire. While the normally-reliable freetaker had an off day from set shots, she was a constant threat from play until Grace O’Toole dropped deep to help chaperon the Limerick centre-forward, a move that also allowed Karen Kennedy to thunder into the fray. In the first half though, Mulcahy was majestic.

Tipp had been forced into a late switch with an injury to full-back Gemma Grace. That saw Mary Ryan switched back from the midfield berth she has been thriving in this year and though not a position she would be unfamiliar with, Tipp certainly missed the Moneygall star’s dynamism further afield.

Devane gave Tipp the lead with a second-minute point from a free but Mulcahy dispossessed O’Toole before making ground through the middle and clipping over a levellers. Limerick were awarded a penalty in the fifth minute, after Dearbhla Egan was unceremoniously by Julieanne Bourke but Mulcahy’s low drive was probably was well saved by Caoimhe Bourke.

The Tipp goalie had to be brave to deny Rebecca Delee soon after but Caoimhe Costelloe landed the first of two exceptional points following a clever switch of direction by the eye-catching Niamh Ryan.

Orla O’Dwyer was back from a hamstring injury and getting on plenty of possession but Tipperary were unable to get Devane or Megan Ryan into the game, while the Limerick workrate was monumental, as evidenced by tremendous blocks by Mulcahy and Sarah Carey

Limerick were not getting scores to reflect their dominance however and they had already conceded an equalising free by Devane when giving up a calamitous goal in the 18th minute.

The industrious Niamh Treacy shot for point but didn’t get the desired purchase on her shot. O’Neill attempted to bat clear rather than catch but got it wrong and the sliotar dropped over the line. Ereena Fryday slotted a point immediately afterwards but anyone thinking the tide had turned irrevocably were quickly disabused of that notion by Mulcahy’s 21st minute wonder goal.

The Ahane artist swooped on a break from a Ryan sideline around 55m out. Fittingly, as the granddaughter of the man credited for inventing the solo run Mick Mackey, and as one of the legends of contemporary Camogie herself, she put on the afterburners, leaving a catalogue of Tipp defenders in her wake.

Fearing being hooked by Kennedy, Mulcahy adroitly changed direction with the sliotar still on the hurley to create the necessary space to get in her strike directly off the stick for a glorious goal. Devane and Laura Stack exchanged points to leave Tipp leading by 1-4 to 1-3 at half-time.

Mulcahy quickly drew Limerick level but O’Dwyer was leading the way at the other end of the field and with Limerick beginning to concede frees, Devane capitalised, regardless of angle or distance. Tipp struck the next five points to put the tie to bed, Devane slotting four of them and O’Dwyer a neat score.

Costelloe scored a beauty from tight to the sideline but a brilliant catch by O’Dwyer set up a score for Miriam Campion and there was no way back for Limerick.

📢 TEAM NEWS: Here are the line-ups for tomorrow's @LibertyIRL All-Ireland Senior Championship Quarter-Final as @LimCamogie face @camogietipp @ 5.30pm! Make sure you're there to cheer on your side! #GoTogether pic.twitter.com/W1Yqeo0q6A

Tickets can be purchased online from www.tickets.ie and from selected Centra and SuperValu stores nationwide

Tickets will also be available to purchase at the ground on the day of the match.

These two have not met in the Liberty Insurance All-Ireland Senior Championship for a while and there is cause for optimism that they might get proceedings off to a thrilling start at Semple Stadium.

Limerick have been one of the great puzzles of Senior Camogie in recent years, coming up as Intermediate champions in 2014 and reaching the National League Division 1 Semi-Finals in five consecutive seasons thereafter.

This was the first time that they managed to convert that form to the summer however, and one imagines that the relief was considerable when their qualification from the group stages for the first time was confirmed.

On paper, they had the most difficult group, including Kilkenny, who have been in five of the last six All-Ireland Finals, and League victors Galway. Having gotten over a titanic tussle with Offaly and Wexford however in their first two outings, they had more or less secured their place in the knockout stages and were able to rest some of their dual players in the defeats to the big guns, albeit that Declan Nash would have liked his charges to be more competitive against the Cats last time out in particular, after giving Galway plenty to think about.

Captain Caoimhe Costelloe has excelled in providing on-field example and Sarah Carey is a constant driving force from midfield, while the powerful Rebecca Delee has proven a considerable goal threat. Niamh Mulcahy remains the talisman for the Shannonsiders, the Ahane star racking up more remarkable tallies from frees and play but her teammates need to share the load for the girls in green to prevail.

Cork were the standout figures in Group 2 but the competitiveness for the other two qualifying spots was significant on paper. Tipperary made the All-Ireland Semi-Final last year but had an eventful introduction to this year’s campaign, with their initial tie against Waterford abandoned after a serious injury to Nicole Walsh. They then lost manager Bill Mullaney, who stood down for health reasons just before the team suffered a heavy defeat to Cork.

Niamh Lillis stepped into Mullaney’s shoes and Tipp displayed tremendous grit to overcome Waterford in the refixture. Triumphs over Dublin and Meath followed and their character was much in evidence as they managed to deal with losses through injury during games to key players in Orla O’Dwyer and Karen Kennedy.

Cáit Devane is their leading scorer but she has real support, and Megan Ryan has been a notable goal threat from the middle third. Clodagh Quirke has excelled as captain but Mary Ryan has been the outstanding performer, in her 15th season of Championship Camogie.

This is one looks to set the pulses racing and the mouth watering. It could go any way and it would be no surprise if extra-time was required to separate them.