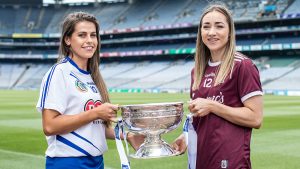 GALWAY qualified for the Liberty Insurance All-Ireland Senior Camogie Semi-Final, having survived the severest of stress tests from a vibrant Waterford at Semple Stadium.

The Déise have been pinpointed as a coming force but are clearly impatient and not willing to wait, as they went toe-to-toe with the League champions before wilting late on.

They led by 2-7 to 1-6 at the conclusion of an exhilarating first half, and forced Sarah Healy into two tremendous saves within four minutes of the restart.

Healy was equal to Niamh Rockett’s shot and then made a stupendous save from Annie Fitzgerald’s hand pass, though Beth Carton, who was terrific in a midfield role, pointed from the resultant 45. Waterford would rue those missed opportunities though and remarkably, they failed to score again.

Cathal Murray will be worried by the problems Waterford caused but the manner in which they asserted themselves in the second half to put down the threatened revolution and foil what would have been one of the shocks of the modern era in the All-Ireland Championship was pleasing.

The Waterford defence, that had been so good for 40 minutes or so, began to creak under increasing pressure and Carrie Dolan capitalised on the many opportunities presented to her, finishing off with 10 points from frees.

Niamh Kilkenny had been anonymous in the opening period but showed all her class and leadership when Galway needed it, bringing the teams level and then with 10 minutes left, giving them the lead for the first time since Carton replied to Aoife Donohue’s opening goal after 16 seconds with a green flag from a penalty two minutes later, after the De La Salle All-Star had been fouled by Heather Cooney.

Waterford were tiring now as Galway got their running game into overdrive, and when Ailish O’Reilly netted with six minutes of regulation time remaining, latching onto a Kilkenny delivery and finishing coolly after driving through the heart of the Déise defence, it was over.

Last year, the occasion of a first ever Senior Quarter-Final seemed to affect Waterford but was no hint of nerves as they shook off the concession of such an early goal with a brilliant half of Camogie.

Dolan equalised from a free but by the end of the opening quarter, Waterford led by two points, Áine Lyng grabbing a brace, including an inspirational effort from just inside the Galway 65, after a being found by Caoimhe McGrath.

Waterford were defending resolutely, and Galway’s much vaunted scorers were struggling, almost completely dependent on Dolan’s accuracy from frees.

In contrast, Waterford were flying and Morrissey hit a fabulous score, Carton winning a dirty ball to set it up.
Dolan had brought the teams level but disaster struck for Galway when Shona Curran’s drive from a free right on midfield flew all the way to the net.

The defenders will be disappointed that they didn’t bat it away and Sarah Healy had no hope once the sliotar bounced in front of her and flew to the net.

Carton had the final say of the half, claiming another hard-won possession before being fouled and doing the needful from 64m to make it a four-point affair at the break. In the end, it wasn’t to be their day, as Galway had too much in the tank.

📢 TEAM NEWS: Here are the line-ups for tomorrow's @LibertyIRL All-Ireland Senior Championship Quarter-Final as @GalwayCamogie96 face @deisecamogie @ 7.15pm! Make sure you're there to cheer on your side! #GoTogether pic.twitter.com/lN8kVMKtIG

Tickets can be purchased online from www.tickets.ie and from selected Centra and SuperValu stores nationwide

Tickets will also be available to purchase at the ground on the day of the match.

Galway would like to have repeated their League Final defeat of Kilkenny in the opening round of the Championship but given the proximity of that momentous Croke Park occasion, perhaps Kilkenny’s motivation was just that little bit greater, after being dominated by the Tribeswomen with silverware on the line.

The westerners’ progression was rarely in doubt however, Ailish O’Reilly and Noreen Coen scoring heavily against Offaly, Limerick and Wexford, though Limerick pushed them hard. Skipper Sarah Dervan is the customary rock at full-back, while Aoife Donohue and Niamh Kilkenny are key operators that manager Cathal Murray is always looking to release into space from deep positions.

Waterford made the Quarter-Final last year for the first time and should be stronger for that experience. They are stronger too for the return to the fold of Trish Jackman, who has been commuting from England. Jackman’s presence has freed up skipper Niamh Rockett to make herself felt closer to the opposition goal and she has had a real impact, adding scores to her ball winning and industry. That is a real boon, given that Beth Carton is one of the premier attackers in the land and the likes of teenager Annie Fitzgerald continues to grow into this level of competition.

Dónal O’Rourke’s crew beat Dublin early on but the loss to Tipperary in what was a refixture, after the opening tie was abandoned due to an injury to Tipperary’s Nicole Walsh, was a blow. The response was impressive, as they inflicted a heavy defeat on a Meath side that has proven much harder to beat this summer. They were composed in accounting for Clare before putting up what was close to one of their best performances of the campaign when leading Cork at half-time in terrible weather before falling to a nine point defeat that was flattering to the Rebels.

A repeat of that type of effort is needed to overcome Galway, who definitely go into this affair as favourites, but if the Déise defence can neutralise their opponents’ all-star attack, with the scoring power at their disposal, they could spring a shock.