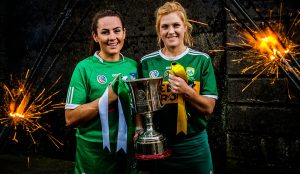 Birthday girl Patrice Diggin scored five points and won player of the match honours, while Sara Murphy backed up a powerful defensive effort with a massive score of her own as Kerry, a county with only one adult club, secured an historic Liberty Insurance All-Ireland Premier Junior Camogie Championship title.

Last year’s beaten finalists are made up entirely of Clanmaurice players with one exception, though Bríd Horan’s Cill Ard operate at underage level.

Kerry were defensively resolute and though they racked up a slew of wides in the closing 10 minutes and finished with an eye-wincing 14, were actually quite economical up front in the first half especially to gain a foothold in proceedings.

Limerick exerted early dominance in the middle and created a number of early chances for scores but were denied by some tremendous defensive work, as Elaine Ryall blocked Michelle Curtin’s hand-pass intended for the unattended Ella Whelan in the second minute to prevent a goal, and less than 60 seconds later, Murphy hooked Whelan as the Newcastle West ace shot for a point.

In contrast, Kerry found the target from their first attack courtesy of teenager Brid Horan in the fifth minute.
Rebecca Noonan excelled for Limerick from placed balls and she levelled from a difficult free tight to the Cusack Stand side and outside the 45. Diggin and Noelle Curtin exchanged scores once more, the latter finishing well after doing wonderfully to emerge form a ruck with possession.

Kerry began to exert themselves at this juncture however, and the hit the next four points via Julianne O’Keeffe, Diggin from play and a free and Jackie Horgan.

Limerick showed a lot of grit to ensure that they were just a point down at the break, frees from Noonan either side of a smart finish by Whelan making it 0-6 to 0-5.

Ian Brick had Kerry fired up for the restart however and he would have been delighted that the two subs he introduced at the interval, Ann Marie Leen and Clodagh Walsh combined for the latter to score within 31 seconds.

A cultured strike by Rachel McCarthy followed and though Noonan maintained her 100 per cent record from placed balls to this juncture, an inspirational score from 60m by Murphy, followed by another converted Diggin free put four between the once more at the three-quarter mark.

The neighbours wouldn’t be shaken off however, and substitute Shauna D’arcy followed another Noonan free to halve the deficit once more but though Kerry generally, and Diggin in particular, were more wasteful than they would like to have been, the midfield general did find the target from one free, and the backs never looked like giving up a goal chance, ensuring history for the Kingdom.

'It's absolutely amazing, I can't even explain how it feels' – Laura Collins speaks to RTÉ Sport after Kerry's win #RTEGAA pic.twitter.com/J9UVntjpVf

🏆 Finals' Week is finally here so make sure you're in @CrokePark this Sunday for the @LibertyIRL All-Ireland Championships Finals!

Who will you #GoTogether with?

For all the info you need visit ➡️ https://t.co/xNIKruGFOV pic.twitter.com/914NZlKWDb

📢 We are delighted that @RTEsport will broadcast LIVE coverage of this year's @LibertyIRL All-Ireland Premier Junior Championship Final on @RTE2 for the very first time! 👏 This means that all 3 of our Finals will be live on air from 11.50am on Sunday September 8th! #GoTogether pic.twitter.com/scXe6LTVmY