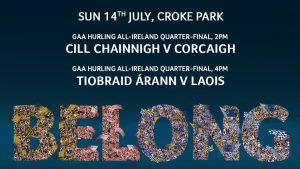 Kilkenny defeated Cork by 2-27 to 3-18 in the Quarter Final of the GAA Hurling All-Ireland Senior Championship on Sunday July 14th at Croke Park, Dublin.

Kilkenny will go through to the Semi-Final stages of the Senior Hurling Championship after a beating Cork today in Croke Park.
It finished Kilkenny 2-27 Cork 3-18
See the full-time highlights here on #GAANOW ! pic.twitter.com/O7NtSpedRr

Kilkenny are back on familiar ground in the All-Ireland senior hurling championship after turning in a powerful second-half performance to see off Cork and secure a semi-final place.

Trailing by two points at half-time, Brian Cody’s side summoned up all their courage and character and displayed no little quality to firstly reel Cork in before turning the screw emphatically.

It was eight unanswered points between the 40th and 52nd minutes that ultimately propelled the 2015 All-Ireland champions through to the last four. They will face holders Limerick in the semi-finals, a repeat of last year’s quarter-final tie which the Shannonsiders won narrowly.

TJ Reid top scored for Kilkenny with 10 points though all of his scores came from frees on a day when the Cats relied on the power of the collective with 12 different scorers in total.

As for Cork, who have now bowed out of the Championship at Croke Park for the third season running, they had an inspired full-forward in Patrick Horgan, who struck 3-10 yet somehow finished on the losing side.

Kilkenny were thankful for their strong bench with Billy Ryan, Walter Walsh and Bill Sheehan all getting on the scoresheet after their introductions in black and amber. It was Kilkenny’s first game since their Leinster final defeat to Wexford yet there was no sign of any provincial hangover or loss of momentum. They conceded 1-1 in the opening three minutes as Cork opened brightly with Horgan converting a penalty and pinching a point.

But their response was impressive, 1-4 without reply to jump onto the front foot and issue a statement of their intentions for the afternoon. It was a tight and tense first-half and the sides were level five times as they traded scores, back and forth.

John Donnelly gathered the ball under pressure at one stage and clipped a fine score. Cadogan did likewise for Cork and Horgan struck their second goal in the 28th minute, nudging them into a narrow lead again.

Horgan did superb to maintain his composure and strike past Eoin Murphy despite losing his footing after a challenge from Padraig Walsh. Cadogan and Horgan added points just before the break and Cork led 2-10 to 1-11. But that Hogan goal, when he pounced on a breaking ball and raced away from Sean O’Donoghue, was the turning point.

Cork briefly got back on level terms at 2-11 apiece but those eight points in a row from Kilkenny left clear daylight between the teams. Reid, Adrian Mullen, Richie Leahy, goalkeeper Murphy and Walter Walsh were all on the mark during this blitzkrieg period for the Leinster outfit. Cork never quite recovered despite briefly rallying with an unanswered 1-03 between the 54th and 57th minutes that included Horgan’s third goal. Cork needed a huge finish but it was Kilkenny that provided it, concluding with an unanswered 0-4 to win in some style.