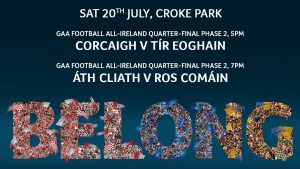 Tyrone defeated Cork by 2-15 to 2-12 in Group 2 Phase 2 of the GAA Football All-Ireland Senior Championship on Saturday July 20th at Croke Park, Dublin.

All-Ireland title hopefuls Tyrone overcame a slow start at Croke Park to record back to back wins in the quarter-final group stage.

Trailing Cork by six points early in the second-half – and by seven in the first-half after conceding two goals – the 2018 finalists found themselves in a difficult position. But Mickey Harte’s side refused to panic and a huge second-half display that included goals from Peter Harte and Cathal McShane – who hit 1-5 each – saw them to an important victory.

Tyrone were at their best in the periods either side of half-time and outscored the Munster finalists by 2-4 to 0-1 between the 27th and 48th minutes. They still had to conjure a strong finale too with Harte, McShane, the excellent Mattie Donnelly and Tiarnan McCann all hitting crucial points.

Cork returned to Croke Park with a point to prove after slipping to a 13-point Phase 1 defeat to Dublin last weekend having matched Dublin for long stretches. They conceded three goals from the 63rd minute of that game and looked intent on proving that the result flattered Dublin. Yet even the Rebels players couldn’t have expected such a great start when they netted inside 15 seconds through their top scorer Luke Connolly.

The stylish forward was fed by the onrushing Ian Maguire and finished cleverly, turning onto his right foot and blasting home in one neat move. In a frenzied opening minute, McShane responded with a point for Tyrone after just 54 seconds. It was a fascinating start and hinted at a thriller with Cork happy to play the lead role throughout the first-half.

Their second goal came in the 18th minute and this time defender James Loughrey was the player who took on the responsibility. Ruairi Deane broke Tyrone’s cover with a hand pass over the top and Loughrey, in space, took his time and guided a right-footed shot to the left corner of the net. Cork led by seven points approaching the half-time and were sitting pretty with a 2-4 to 0-5 interval lead despite back to back late points from Peter Harte.

The Tyrone management responded by ripping up his play-book and changing a fifth of his team for the second-half, bringing on Michael Cassidy, Richard Donnelly and Padraig Hampsey at the break. It amounted to changes in defence, midfield and attack and, allied to a clear upping of the ante, Tyrone were dramatically ahead after 48 minutes. A 44th minute McShane goal when he palmed home after good work in the buildup by Mattie Donnelly and Michael McKernan fuelled their resolve.

Harte then converted a 48th minute penalty after a shove on Niall Sludden to put Tyrone into a 2-7 to 2-5 lead, the first time they were ahead. Cork refused to throw in the towel and the sides were level twice after that at 2-9 and 2-10 apiece but Tyrone, crucially, never trailed again. And when the need was greatest it was the Ulster outfit that drew on all their big game experience to grind out a priceless win with seven points from the 60th minute onwards.

The Cork Senior Football Team to play Tyrone has been announced. https://t.co/WAHzBtOh3j pic.twitter.com/ukU2AWbKBy