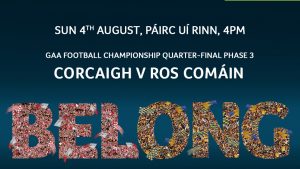 Report By Denis Hurley at Páirc Uí Rinn for GAA.ie

Three second-half goals helped Roscommon to secured third place in Group B of the All-Ireland SFC quarter-finals, the Connacht champions earning victory over Cork at Páirc Uí Rinn on Sunday.

The last time Roscommon visited Páirc Uí Rinn, for a league game in 2016, they scored 4-25 but the wet and windy conditions meant that such an outcome was always remote here, but they matched the four green flags and that proved crucial.

However, Cork made light of the tempest as they hit the ground running, Luke Connolly opening the scoring with an early free and then intercepting Darren O’Malley’s kickout to set up Mark Collins for a goal.

Unreal start for @OfficialCorkGAA with a super goal from Mark Collins! pic.twitter.com/la9n0pjLGE

Connolly followed that with another point and Cork were five clear after just four minutes. Good starts had characterised their previous group games against Dublin and Tyrone and, just as in those ties, Cork saw their advantage eroded.

They still led for all of the opening period, though Conor Cox’s good free-taking helped Roscommon to get into the game and they were just two behind, 1-3 to 0-4, after 16 minutes.

After Cox wasted a chance from a free to reduce the margin to a point, Cork gave themselves breathing space again with Kevin O’Driscoll profiting from a wonderful Connolly pass and Ruairí Deane also getting on the scoresheet.

Cox had his fourth for Roscommon but Cork should have had another goal on 25 minutes as Paul Kerrigna’s pass gave Connolly a chance but his low effort was just wide.

Soon after that, Roscommon were level as Cathal Cregg set up Brian Stack for a well-taken goal, but Cork hit straight back as Eoghan McSweeney’s inviting delivery was punched home by Connolly.

Cork wouldn’t score in the six remaining first-half minutes, with Shane Killoran and Cox on target to bring Roscommon to within the minimum again.

While Andrew Glennon tied matters on the resumption, two Mark Collins points put Cork clear again but it was the last time they led as Cox and Glennon set up Stack for a second goal on 52.

When Cork wasted a chance to tie with a Connolly free, Enda Smith made it 3-8 to 2-7 following a fine team move. Though James Loughrey brought Cork back to within a point as he punched John O’Rourke’s pass to the net, Roscommon got a fourth goal through midfielder Shane Killoran on 69.

That left them 4-8 to 3-7 ahead and, though subs Stephen Sherlock and O’Rourke pointed for Cork in injury time and Roscommon finished with 14 as Tadhg O’Rourke was black-carded with all six subs used, Donie Smith had the last point to ensure the win for Roscommon.

The Cork Senior Football Team to play Roscommon on Sunday has been announced. https://t.co/OtZtbFv6bS pic.twitter.com/Y76U4H0gvt