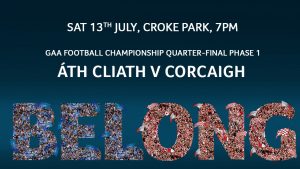 Dublin defeated Cork by 5-18 to 1-17 in Group 2, Phase 1 of the GAA Football All-Ireland Senior Championship on Saturday July 13th at Croke Park, Dublin.

Watch all the Full-Time Highlights from Dublin v Cork here on GAANOW. pic.twitter.com/C1auUmnTUI

REPORT: A late goal-rush from @DubGAAOfficial saw them eventually overcome a @OfficialCorkGAA team that gave as good as they got for the first 60 minutes of the match in this evening's entertaining All-Ireland SFC Quarter-Final at Croke Park.

A late barrage of goals eased Dublin to another huge win at Croke Park, getting their All-Ireland quarter-final group stage campaign off to a flying start.

Just three points separated the teams approaching the hour mark but Dublin opened up with some thrilling football in the closing minutes, drilling three more goals to put the game beyond doubt.

Yet it all started so well for Cork who flew into a four-point lead in front of 30,214 and married the quality of their early attacking play with ultra efficiency.

Kevin O’Driscoll, who lined out at midfield in a restructured Cork team due to Paul Kerrigan’s inclusion, hit their opening point.

Sean White, Kerrigan again and Ruairi Deane added three more and with just six minutes on the clock the Rebels led 0-4 to 0-0.

Everything was going right for Cork in this period and Kerrigan’s second score came moments after a penalty that was initially awarded to Dublin for a foul on the excellent Con O’Callaghan was overturned.

The Deane score similarly originated from a turnover in the Dublin defence.

But Dublin couldn’t be kept quiet for long and soon found their range. O’Callaghan was hungry and incisive from the start and hit their first score in the eighth minute.

Dublin’s next score was a McCaffrey goal in the 11th minute and suddenly, for all of Cork’s good work, there was just a point in it at 0-5 to 1-1.

Cork will kick themselves for the concession as McCaffrey, after being fed by Paul Mannion, slipped away from Sean White and Thomas Clancy, before pirouetting and firing a shot across the goal from right to left.

Dublin drew level in the 16th minute and a Fenton point two minutes later put them ahead for the first time. It was a lead they wouldn’t relinquish even if a 2-9 to 0-9 half-time advantage flattered the hosts.

Dublin led by just 1-9 to 0-9 deep into first-half stoppage time when O’Callaghan won a ball in the air with his back to goal and laid it off to Costello.

Free-taker Costello burst clear down the left and passed to the back post for Macauley to palm in Dublin’s second goal.

Cork were terrific throughout the third quarter and until those late goals flew in for Dublin. They got the margin back down to just two points on a couple of occasions with Luke Connolly firing in a 46th minute penalty.

Ian Maguire was pulled down by Cian O’Sullivan for the spot kick and Connolly, after a short run up, found the left corner.

Cork continued to ask all sorts of intriguing questions of Dublin’s defence but the introduction of Dean Rock was crucial. The free-taker finished with five points for Dublin, four from placed balls, while those goals, which all came from the 63rd minute onwards, killed the contest.

.@OfficialCorkGAA football team manager, Ronan McCarthy, admits his team were "a little naive" in the final 15 minutes of this evening's All-Ireland SFC Quarter-Final clash with @DubGAAOfficial at Croke Park. pic.twitter.com/lmTo1UsCNJ