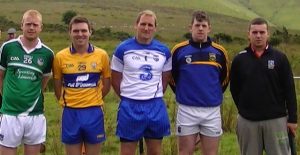 The Munster GAA Puc Fada 2014 took place on the slopes of Galteemore on Saturday 12th July. Senior, Under 16 and Camogie players competed to see who could cover a track over the mountainside in the least number of Pucs with the winners and runners-up representing Munster at the National Puc Fada in the Cooley Mountains in August.

Click to view photos from the Munster Poc Fada Final

In the Senior Men’s competition Andrew Fahey (32 pucs) was the winner overcoming last year’s winner Stevie Brenner by one puc. Barry Kenneally from Cork took 18 pucs over a shorter course to win the Under 16 competition with Fionáin Mackessy (Kerry) second, one puc behind. In Camogie, last year’s runner-up Martina McMahon from Limerick took the top prize with 24 pucs.

Chairman Robert Frost and Vice-Chairman Jerry O’Sullivan representing Munster GAA were in attendance at the tournament along with members of the Games Development Committee and Christy Ryan represented sponsors Martin Donnelly. Aherlow GAA were magnificent hosts of the tournament.

Munster GAA wish to thank everyone who helped make last Saturdays ‘Poc Fada na Mumhan’ such a tremendous success. A special word of thanks to Pat Moroney and the Aherlow GAA Club for facilitating us with a fantastic venue and course. Thanks also to all of the volunteer referees and markers who helped out on the day. Andrew Fahy (Clare) and Stevie Brenner (Waterford) have qualified for the National Senior Comeptition with Barry Kenneally (Cork) qualifying for the National Under 16 Competition. Both will be held in the Cooley Mountains on Saturday August 2nd.

The following are the results of the competitions