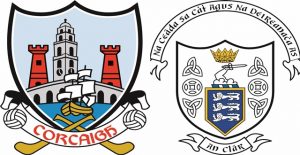 Clare defeated Cork by 2-17 to 1-17 in the Electric Ireland Munster Minor Hurling Championship Semi Final on Tuesday May 3rd at Páirc Uí Rinn.

Clare continued their winning ways this week when their minor team got the better of defending champions Cork in the Electric Ireland Munster MHC semi-final at Páirc Uí Rinn.

There was no denying Brian O’Connell’s charges were the better team. Twice – once in either half – they pushed six points clear. And while Cork drew level at the break, and reduced the arrears to two in stoppage time, it was their scoring struggles that cost them.

Paudie Murray’s side topped Group 2 and having not played competitively for three weeks, they were rusty – their wides tally of 21 was twice as many as the visitors.

Clare, meanwhile, who finished second in Group 1, survived a tough test that will surely stand to them in the final against Tipperary on Wednesday May 11.

The winners had so many heroes including their goalkeeper Mark Sheedy who saved bravely from Ross O’Sullivan at the death and Oisin Whelan who scored 1-8 – bringing his championship tally to 2-30.

The early exchanges were even, tied three times in the first eight minutes, before Clare raced into a four point lead through outstanding trio Whelan, James Organ and Jack O’Neill.

On top around the midfield and half-back area, a lengthy clearance from Riain McNamara was fired to the net by Whelan in the 22nd minute, 1-7 to 0-4.

Cork, meanwhile, were so wasteful, by the end of the half their wide count had grown to 13.

However, they dragged themselves back into contention, outhitting Clare four points to one – Sean O’Donoghue, James Murray, Timmy Wilk and Peter O’Shea giving the home support something to cheer about.

A goal from Ross O’Sullivan after he connected with O’Shea’s long delivery on the stroke of half-time, brought the sides level. Michael Collins and Adam O’Sullivan swapped points to leave the score at the interval, 1-9 each.

Clare got a tonic start to the second-half, Cian Neylon had the sliotar in the net after he was put through by Sam Scanlon and Organ followed with a point. On 40 minutes, they pushed 2-13 to 1-10 up.

Adam O’Sullivan, Daniel Murnane and O’Shea sent over points for Cork and with four minutes remaining, they had closed the gap to 2-16 to 1-16. Substitute John Wigginton Barrett was through on goal but he was dispossessed and then Sheedy made his intervention on Ross O’Sullivan.

Ross O’Sullivan converted the ’65 to leave it a two-point game in stoppage time.

Clare wouldn’t be found wanting however, and fittingly, in the last play it was Whelan who was fouled in the middle of the park. He rifled over the resultant free. 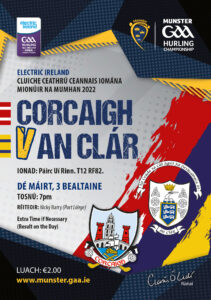 The Cork Minor Hurling team to play Clare in the Munster Semi Final has been announced https://t.co/EF5Xcs7EPL#SportsDirectIreland #BorntoPlay pic.twitter.com/OglSyuXsSg

The Clare Minor Hurling side for tomorrow night’s @ElectricIreland Munster Semi Final Clash vs. Cork – Throw in at Pairc Ui Rinn is at 7pm. pic.twitter.com/3y5b17Rzho