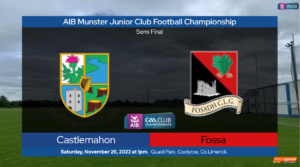 Report by Mortimer Murphy for the Irish Examiner newspaper

BEFOREHAND, the Munster Council had the unusual task of alerting would-be travellers not to bother – the Munster Club JAFC semi-final at Coolyroe was already a 1,500 sellout. Doubtless, the work of one D. Clifford.

As it transpired, they did that cohort a favour as Kerry champions Fossa made light work of Castlemahon at Quaid Park, Coolyroe on Saturday.

Ahead of the semi, the talk was how would Castlemahon curb the threat of footballer of the year David Clifford but in their efforts to counter the Cliffords, they ignored the O’Shea brothers, Emmet and Tadgh, and they outshone their colleagues scoring 1-10 between them and all from play.

It was as one-sided a contest as is imaginable as Fossa took full advantage of the first half elements to their backs. Castlemahon took the lead in the fourth minute from an Alan Roche free but that was their last score until the 49th minute when substitute Mike Fitzgibbon, who returned from Dubai from the game, kicked a point from play. But at that stage, David Clifford was already on the sideline having been given a rare breather this year as a rescue act was not required.

Fossa dominated around the middle thanks to Paudie Clifford, Matt Rennie, Cian O’Shea, and Paddy Sheehan, and Castlemahon could never muster any threat. The hosts were also guilty of turning over the ball with regularity against a rampant Fossa side.

David Clifford had two wides before Fossa cut loose in the fifth minute with a point from man-of-the-match Emmet O’Shea, quickly followed by a brace his brother Tadgh. While Emmett was back in the 10th minute to score another point from a David Clifford assist. Clifford eventually got on the score sheet in the 12th minute when he converted a free.

A succession of points followed by Emmet O’Shea, David and Paudie Clifford, and Matt Rennie as Fossa moved 0-10 to 0-1 in front after 20 minutes. A black card for Mike Fitzgibbon in the 24th minute didn’t help the home side and seconds later David Clifford sent Emmet O’Shea through who blasted the ball to the Castlemahon net. It was 1-11 to 0-1 at half time.

The second half was academic. Fossa continued to dominate in the third quarter, adding another seven points with a brace each from Paudie and David Clifford, while Emmet O’Shea and Matt Rennie also added points as Fossa emptied their bench. Castlemahon tried until the very end and Alan Roche kicked three points, while Mike Fitzgibbon got the other. But it was a day where Fossa eased into a Munster final where they will face Cork champions Kilmurry.

Today’s match has reached its capacity of 1,500 at Quaid Park in Coolyroe. Please do not travel without a ticket as all supporters, including Under 16s require a ticket and this game is now sold out. The game will be streamed live on Munster GAA TV.