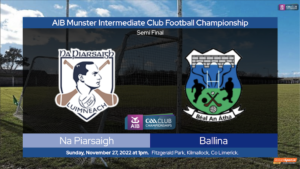 Na Piarsaigh (Limerick) defeated Ballina (Tipperary) 4-2 on penalties after the sides finished level after extra time on a scoreline of 1-5 to 0-8 in the AIB Munster GAA Football Intermediate Club Championship Semi-Final on Sunday November 27th at Kilmallock.

Highlights as @NapGAA were taken all they way to penalties by @BallinaGAA The Limerick side with now play Kerry's Rathmore in the final. @AIB_GAA | @StreamsportI https://t.co/hyJtdA2J5J

Eoghain Sherlock proved to be the hero as the Na Piarsaigh goalkeeper saved two Ballina penalty kicks, to add to his second-half save from Steven O’Brien’s spot-kick.

The young netminder then saw four spot kicks converted by his teammates, with Evan Egan eventually confirming a first ever Munster intermediate football final spot for the Limerick side.

With no overlap from their senior hurling panel, there was little hangover from last week’s loss to Ballygunner at the same stage of the senior hurling championship. These sides served up a scrappy and tense affair, with neither ever able to pull clear.

Perhaps appropriately, the sides were deadlocked at half-time, full-time and at the end of extra-time. Even when Ballina did lead at the midway point of the extra period, they didn’t look to have the conviction to seal their spot in next month’s decider.

Eoghan Power got the Tipperary men off the mark in the first minute but Na Piarsaigh found the game’s only goal through Dylan Cronin on five minutes. The captain followed in following a good save from Jack Brady.

Power and inter-county man, Steven O’Brien were on target in a disappointing first half, during which the Tipperary side kicked six wides.

O’Brien was denied from the penalty spot by Sherlock on 32 minutes, and the same result would come in the shootout.

Jack O’Mahoney forced this game into the extra period entering stoppage time and Ballina looked to pull clear with David Kelly and O’Brien (free) putting them two clear with 77 played. But Cronin’s free and an Evan Sweeney effort forced the penalties.

O’Brien and O’Mahoney were both denied by Sherlock, with Gordon Brown, Jack Barry, Kieran Daly and Egan helping book a final clash with Kerry’s Rathmore.