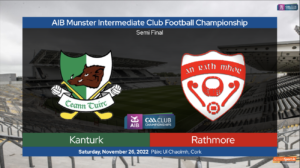 Rathmore a class apart as they ease past Kanturk https://t.co/Atimky5MBE

RATHMORE manager Denis Moynihan was delighted when he heard their Munster IFC semi-final against Kanturk was to be played at Páirc Uí Chaoimh. The Kerry champions recorded an impressive 1-17 to 2-6 victory on Saturday, at one stage in the second-half, leading by 16 points.

“The danger with Kanturk was their physicality. We were very worried about that. It was like winning the lotto when I heard we were coming up to Páirc Uí Chaoimh because I reckon if they got us into Mallow with a heavier surface, we could have been in trouble. The venue was great, to be quite honest.

“Most games, we play with an extra man back. We felt today we would go man-to-man and target their midfield area which is very strong all year. We saw most of their games and videos. I thought our two midfielders, the Ryan brothers Mark (captain) and Cathal were a huge call for us and they performed.

“The goal from John Moynihan set us up. He looks ordinary but once he gets the ball in hand, he is like a bit of a snake. He is always up for a goal or two, no doubt.”

In fact, the manager has a team full of leaders. Another Ryan brother Shane rowed in with six points. Shane, along with Paul Murphy are All-Ireland senior medallists this year. Murphy, though, is set to miss the Munster final against either Na Piarsaigh or Ballina Sunday fortnight.

“Shane is okay, he is staying around. He has a house to build. He is foregoing the first week of the (Kerry team) holiday. Paul is going on a long-due honeymoon for four weeks, he got married last year. He will be a big loss, but we have a panel. Hopefully, we will get someone to fill his boots.”

It was a disappointing day for Kanturk who impressed in their Cork PIFC final win over Bantry Blues after they had lost the two previous deciders. A two goal burst in the 43rd and 49th minute today put a better complexion on the scoreboard.

Kerry’s dominance in this competition speaks for itself. The number of titles won is Kerry (14) Cork (4).

“Kanturk were bound to hit a purple patch. I trained a lot of teams in Duhallow and I followed Duhallow football as a young fellow. I actually played U12 football with Knocknagree. I am a fan of Duhallow football and if we didn’t get through today, I would have loved to see Kanturk go through.

“I socialise in Knocknagree. All my friends and neighbours are always saying – it is kind of wrong to St Michael’s (SAFC winners) technically. I think Cork are doing something about it, they are rising the grades. When they look at that, I think they will have more success.”

Rathmore ahead 1-10 to 0-2 at the break. They began the second-half in determined fashion. There was a superb block by James O’Sullivan in front of his own goal, and then a scoring opportunity for John Moynihan that came back off the post. Moynihan then had the ball in the net, but referee Derek O’Mahoney had called for a free – which Spiers converted. The next four points went the way of Rathmore, 1-15 to 0-2.

Grantus Bucinskas pulled a goal back for Kanturk and when Ian Walsh found the net followed by an Aidan Walsh point, they trailed by eight points with Rathmore temporarily reduced to 14 men after Fionn Holohan was black-carded in the 44th minute.

As the game petered out, there was never any danger of Rathmore losing this one. They awaity Sunday’s winners from the other semi-final between Na Piarsaigh (Limerick) and Ballina (Tipperary).