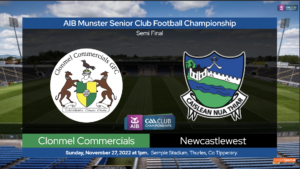 After his team-mate Ruadhan O’Connor’s point had sent the game into extra-time, Clonmel Commercials’ 1-10 to their 0-13, the Limerick men were by far the better side on the teams’ reappearance for the additional periods in FBD Semple Stadium.

Clonmel commenced extra-time without Kevin Fahey and Ciaran Cannon after both were sin-binned deep into additional time. In the time they were off, Newcastle West had managed just a point, an Eoin Hurley mark, but Commercials couldn’t add anything at the other end.

Matters became worse for Tommy Morrissey’s side just before half-time when Iain Corbett broke forward and found Rigter in plenty of space and he tucked away a goal to push Newcastle West 1-14 to 1-10 up at the turnaround.

Eoin Hurley added one from play and a placed ball, the latter costing Tadgh Condon a black card, and save for a Michael Quilligan block on Aldo Matassa the remainder was largely a formality for the men in black and white.

In the second half of normal time, Jack Kennedy had ruled the air for Commercials but their lead was reduced to one with 10 minutes left as Brian O’Sullivan continued Newcastle West’s rich vein of long-range kicking.

A dubious 53rd-minute free in the favour of the excellent Cian Sheehan when he had lost control of the ball allowed Eoin Hurley to square the game for the second time in the second half.

Rigter pushed them into the lead for the first time since the end of the first half but Michael Quinlivan cancelled it out in the penultimate minute of normal time, weaving his way forward from the sideline to fist the ball over the bar.

Three minutes later and Fahey appeared to be the match-winner but in the eighth minute of additional time, at least five had been signalled, O’Connor was able to send over the equaliser and force another 20-plus minutes.

Newcastle West had opened the scoring in normal time too, Corbett combining with his fellow Limerick colleague and All-Star nominee Sheehan to split the posts in the fourth minute. However, Commercials dominated the play for the next 10 minutes. The problem for them was they only troubled the scoreboard twice.

Scores from Jason Lonergan and Seán O’Connor in quick succession gave them an advantage but they looked edgy otherwise. Michael Quinlivan was twice whistled for picking the ball from the ground and while the industry of Ross Peters was admirable the end product of his efforts weren’t as he hit two wides.

Colman Kennedy also had a point blank save denied by Quilligan in the 11th minute, although the shot was straight at the Newcastle West goalkeeper.

That let-off and Commercials’ general sluggishness gave the visitors some impetus and they hit the next four points in a six-minute spell. Frees from Hurley and Diarmaid Kelly were followed by another Corbett-Sheehan combination but Sheehan putting the finishing touch to the move and Kelly adding his second.

A Jack Kennedy free for a foul on a roving Seamus Kennedy on the half-hour mark bridged a 24-minute gap to Commercials’ last score. As Newcastle West struggled with their restart, a long ball was put into O’Connor and he turned neatly to send a point over his shoulder.

With the difference now reduced to a point, the impressive full-forward found the net in the second minute of additional time as Commercials again feasted on their opponents’ restart. Pádraic Looram and Colman Kennedy linked up in the advance, the latter finding O’Connor whose strike was clinical.

Kelly took some of the sting out of that Commercials’ rally with his third point to bring Newcastle West within a point at the break, 0-6 to 1-4, but the Tipperary champions had shown how devastating they can be in bursts.

Sunday’s Match Programme will be available to purchase at FBD Semple Stadium at a cost of 3 euro. 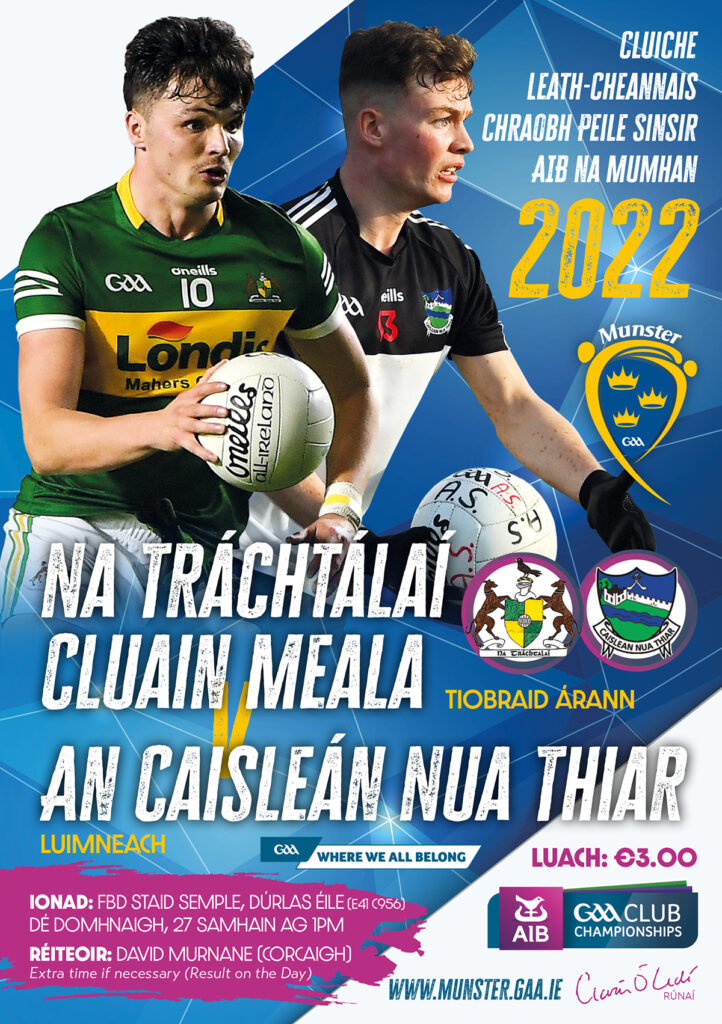