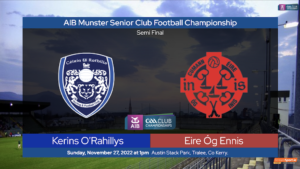 FOURTEEN-man Kerins O’Rahilly’s held on Sunday in Tralee for a famous win to secure the club’s first Munster final appearance in 13 years.

The 22nd minute dismissal of David Moran for two yellow card offences in quick succession meant Kerins O’Rahilly’s had to play with 14 men and without their totemic midfielder for 40-plus minutes of this tetchy provincial semi-final.

Éire Óg would also finish with 14 men. Corner forward Mark McInerney walked for a second yellow two minutes from the hour. Another Éire Óg player, Niall McMahon, saw red in second-half stoppages when he ran from the dugout out onto the field and challenged Jack Savage.

Ahead by 1-4 to 0-4 at the break, Kerins O’Rahilly’s widened the gap out to five within five minutes of the restart. Gavin O’Brien, 16 seconds after the throw-in, and the home-from-Dubai Jack Savage left the Kerry representatives sitting pretty, even allowing for their numerical disadvantage.

A superb Einne O’Connor goal on 36 minutes brought Ennis right back into contention. But they were unable to get level at any point in the second half. Wides, the post, and point attempts dropped short cost them dearly, as had been the case in the first half also.

One point was as close as they got, that on 56 minutes when Gavin Cooney (free) and Ciarán Russell threw over a pair one after the other.

Two minutes later, it was 14 versus 14. McInerney, booked earlier in the second period, was flashed a second yellow for his rash challenge on Savage. The latter, rather inexplicably, then kicked the free backwards and straight into the hands of Éire Óg’s Cooney. He passed to sub Philip Talty but his levelling effort was blocked by corner-back Darragh McElligott.

Psychologically, a massive result for the Strand Road men.

Although the first quarter moved along at a brisk enough pace, it wasn’t until the 22nd minute when this Munster semi-final really got going. And got right fiery too.

David Moran, a few minutes earlier, had received a yellow card of the softest variety for an entanglement with Éire Óg centre-forward Ikem Ugwueru. The same two players clashed on 22 minutes when it was the Éire Óg man who fouled the Kerry midfielder.

But Moran reacted to the foul when shoving Ugwueru off him. The latter promptly hit the deck. Referee Sean Lonergan didn’t like what he had seen and promptly issued Moran with a second yellow card.

In the play or two after that, Jack Savage needlessly fouled Ugwueru. There was a danger, you felt, of Rahilly’s losing the collective head such was their perceived injustice of the Moran dismissal.

A Tommy Walsh point on 26 minutes was pivotal in settling his teammates and returning focus to the job at hand. A minute later, the towering full-forward launched himself into the sky for a trademark fetch. It was a mark he comfortably directed between the opposition posts to grow his own personal tally to 1-2 and Kerins O’Rahillys’ lead to 1-4 to 0-3.

Walsh’s goal – a high ball touched to the net – was part of a 1-1 lightning start that had Rahilly’s four in front by the third minute.

Éire Óg Ennis, led by Manus Doherty, Einne O’Connor, and Ciarán Russell charging out from the back, asserted themselves thereafter. But while Gavin Cooney and Niall McInerney (mark) landed three white flags on the bounce, their efforts were frustrated by a first half wides total of six and two more that dropped short. This collection of misses contributed to a first half barren spell that ran for 19 minutes.

The Clare champions will carry home sizeable regrets at their accumulation of misses.

Sunday’s Match Programme will be available to purchase at Austin Stack Park at a cost of 3 euro. 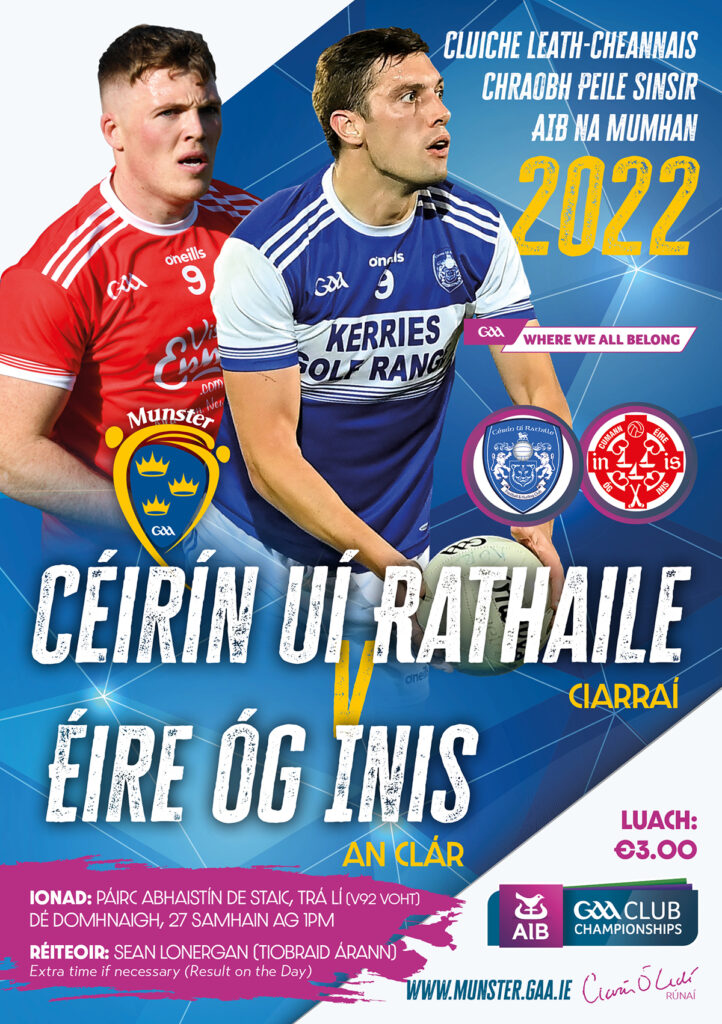