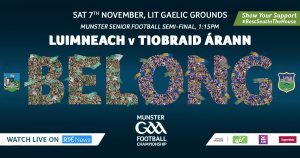 Tipperary defeated Limerick by 1-15 to 2-11 after extra time in the Munster Senior Football Championship Semi-Final on Saturday November 7th at the LIT Gaelic Grounds.

REPORT: Conor Sweeney and Brian Fox were @TipperaryGAA's heroes as they pipped @LimerickCLG after extra-time to qualify for the Munster SFC Final. #GAA #GAABelong

Report By Shane Brophy at LIT Gaelic Grounds for GAA.ie

A Brian Fox point in injury time of extra time settled this Munster Senior Football Championship Semi-Final in the favour of Tipperary over Limerick at the LIT Gaelic Grounds.

The game appeared destined for the first ever penalty shootout in championship football before the veteran player took it upon himself to make the run through the middle and when the chance presented itself he slotted over for what proved to be the winner.

Limerick had one great chance to equalise, but Seamus O’Carroll missed a close range free after claiming a mark and with it went the Shannonsiders chance of a first Munster Final appearance since 2010.

The early stages of the contest were extremely tentative with the sides sharing the first eight points by the water-break with Conor Sweeney opening the scoring with a fifth minute free with Tipp’s other scores coming from frees from Sweeney and Jack Kennedy while Michael Quinlivan had a goal-bound effort turned over the bar by Limerick keeper Donal O’Sullivan.

O’Sullivan has been on the scoresheet for the home side from a placed ball with Sean McSweeney, Hugh Bourke, and Cillian Fahey also on target as the Shannonsiders were playing with a greater pace to their play.

They struck for their first goal on 26 minutes when a Tommie Childs run broke open the Tipp defence and he played in Sean McSweeney who kicked low to the net. Tommy Griffin extended the lead with a point from play before they struck for a second goal on 32 minutes as a sublime Tony McCarthy kick pass found Cillian Fahey who had drifted off Jack Kennedy and he gave Evan Comerford no chance.

Tipp responded with a Conor Sweeney point from play, just their second of the half but fine Killian Ryan point in added time gave Limerick and 2-6 to 0-5 half time advantage.

Tipperary began quickly to eat in the deficit at the start of the second half with frees from Kennedy and Sweeney and a Kevin Fahey point from play. The momentum was now with the visitors with Sweeney adding two to his tally before Liam Boland reduced the margin to one. Then Liam Casey goaled in the 55th minutes, reacting quickest to a Emmet Moloney shot which came back off the post, and now Tipp really had their tails up.

The water-break proved timely for Limerick who responded with points from Darragh Treacy and a Hugh Bourke free to draw level before Cian Sheehan looked like he had kicked the winner. But then caame a moment of class from Conor Sweeney who converted a free from out on the side-line with the outside of his left foot to send the game to extra time.

A Liam Boland point was the only score in the first period of extra time before Limerick levelled through the returning Sean McSweeney before Donal O’Sullivan converted a 45 after his opposite number had made a fine save from Hugh Bourke.

After Robbie Kiely had levelled once more, O’Sullivan had a chance of converting another 45 but it flew inches before in the dying seconds he watched as Brian Fox’s shot sailed over to send Tipperary into a first Munster Final since 2016. 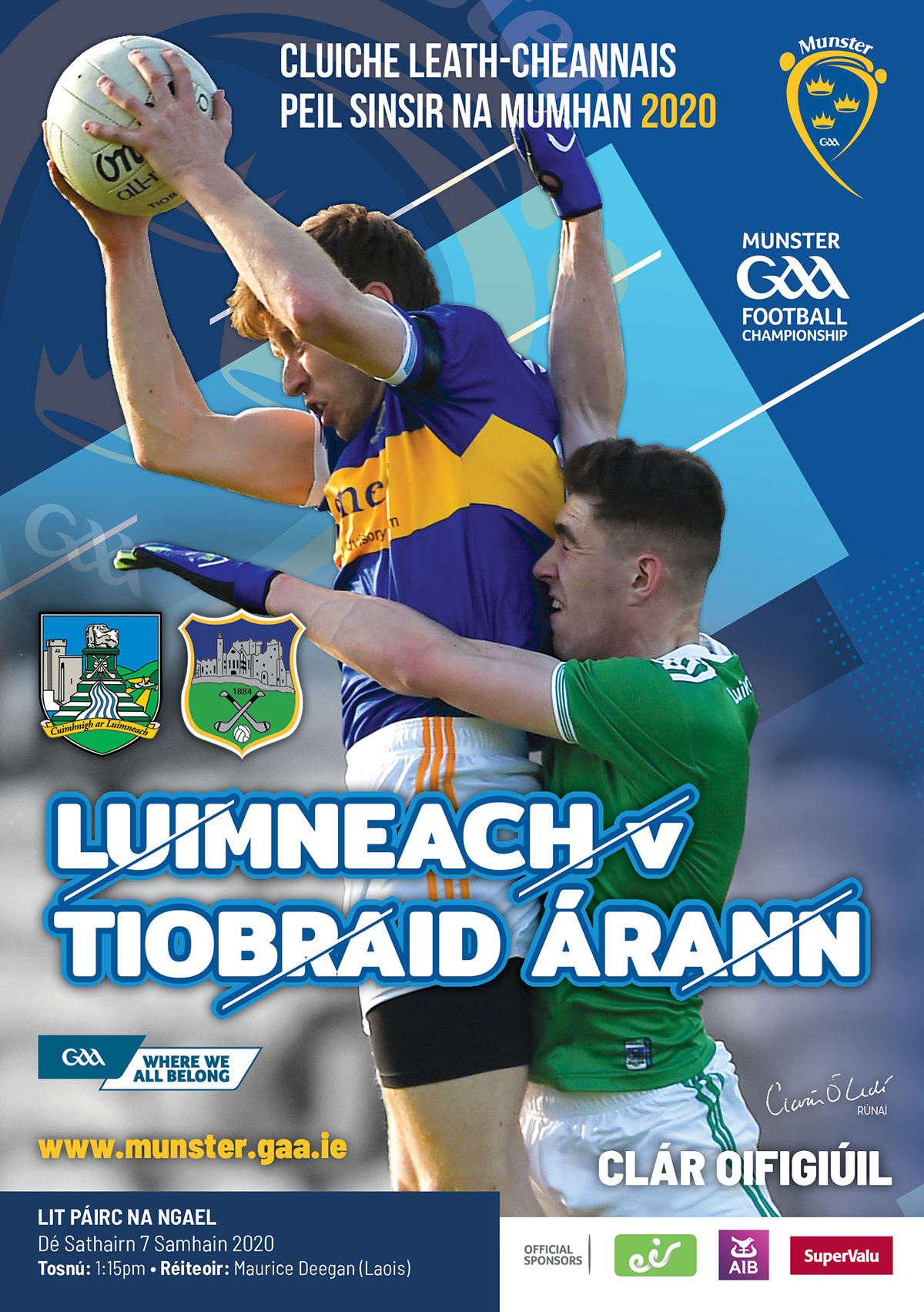 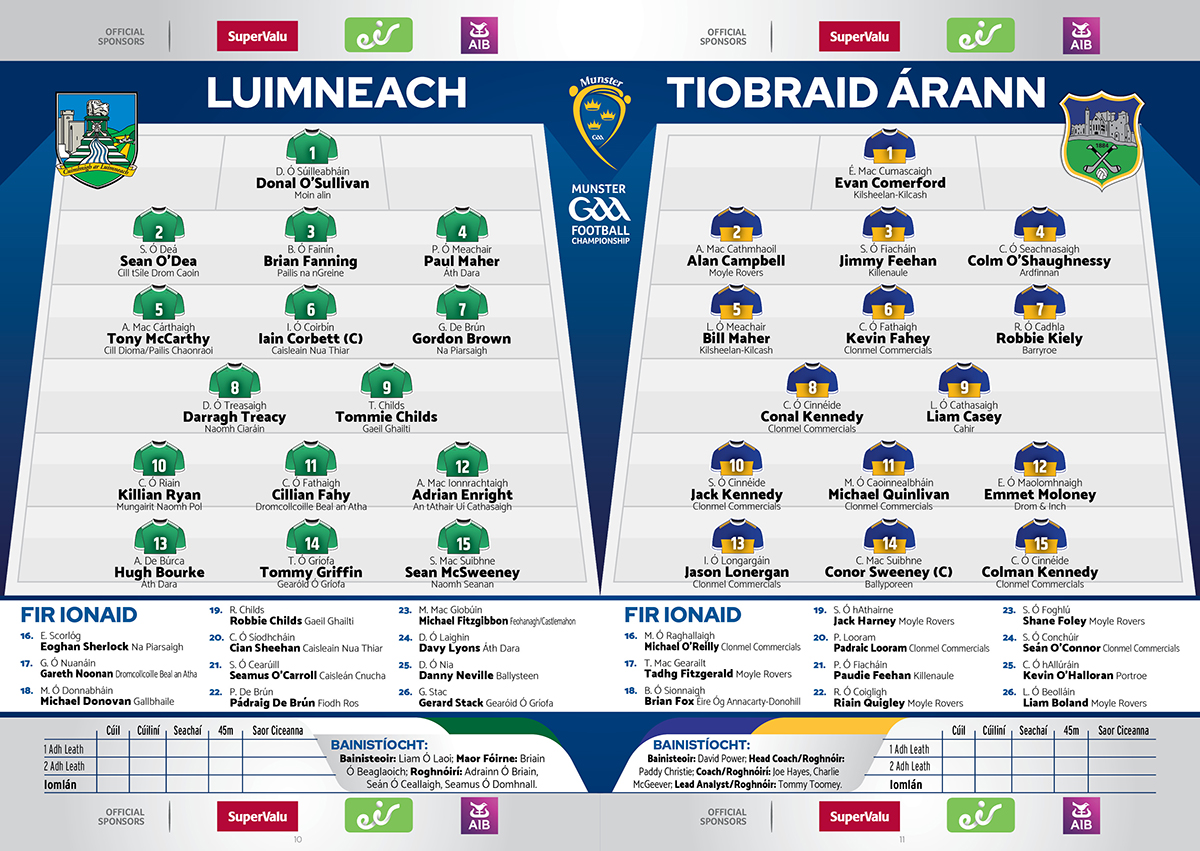 The Limerick Senior Football team v Tipperary tomorrow in the @MunsterGAA SF semi final in the Gaelic Grounds 1.15pm has been announced… pic.twitter.com/HRKrRSwtKp

This Saturday afternoon, November 7th, Tipperary head to the LIT Gaelic Grounds to play Limerick in the Munster Senior Football Semi-Final where throw in is at 1:15pm.
Manager David Power has announced his side pic.twitter.com/vUyQ0nBuwZ