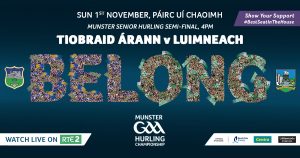 Limerick defeated Tipperary by 3-23 to 2-17 in the Munster Senior Hurling Championship Semi-Final on Sunday November 1st at Páirc Uí Chaoimh.

REPORT: @LimerickCLG were just too good for @TipperaryGAA in today's Munster SHC semi-final at a wind and rain-lashed Páirc Uí Chaoimh. #GAA #GAABelong

Report By John Harrington at Páirc Uí Chaoimh for GAA.ie

Limerick’s green machine bested both the elements and Tipperary without too much trouble in a wind and rain-lashed Páirc Uí Chaoimh this evening.

They were much the superior force against a Tipperary side that struggled to cope with their greater athleticism all over the field and range of scoring threats.

11 Limerick players scored from play compared to just six from Tipperary, which told its own story, and in Aaron Gillane they had the sort of ball-winning and ball-playing focal point in attack their opponents didn’t.

The reigning All-Ireland champions tried with all their might, but at times they resembled someone trying to arm-wrestle a stronger man.

They were far too reliant on Jason Forde’s free-taking and apart from Jake Morris’ first-half goal never really looked like cutting open the well-organised Limerick defence.

That Morris goal came after 20 minutes just after he’d scored a sweet point, and at that stage of the game Tipperary would have been pretty pleased with their lot.

They were playing against the gale but trailing by just one point, 0-9 to 1-5.

But that was about as good as it ever got for them, because Limerick went straight down the field after Morris’ goal to score one of their own when Aaron Gillane kicked the sliotar to the net.

Limerick really turned the screw from there until half-time, outscoring Tipp by eight points to three to lead by 1-17 to 1-8 at the break.

A feature of their play in that first half was their intelligent use of the ball.

They didn’t just try to make the most of the gale at their backs by lamping it long, but moved it patiently towards the middle third where players like William O’Donoghue and Cian Lynch in particular used it smartly.

Still, considering the weather conditions, Tipperary would have felt that a deficit of nine points was just about manageable with the driving wind and rain at their backs in the second-half.

A quick start surely fuelled that belief as a Niall O’Meara point sandwiched by two Forde frees reduced the gap to six.

As if sensing the danger, Limerick redoubled their efforts and their ability to dominate the collisions and emerge with ruck ball became a decisive feature of the match.

Their forwards were working just as hard without the ball as with it, and that desire to scrap for everything led to a penalty on 48 minutes when Gearoid Hegarty was felled in the square after rabid Limerick pressure on the Tipperary defenders turned over the ball yet again.

Gillane’s shots was wickedly struck, and when the net billowed it took a lot of the wind from Tipperary’s sails and they never really looked like winning the match thereafter.

Kyle Hayes played as a highly effective sweeper in the second-half for Limerick and his presence allied with the already dominant Limerick half-backs meant the Tipp inside forwards were padlocked behind an iron gate.

Even when John McGrath scored a second goal for Tipperary on 55 minutes it failed to ignite their challenge.

Limerick simply dusted themselves down and went again, with substitutes like David Reidy, Seamus Flanagan, and Pat Ryan giving them another surge of momentum in the final quarter.

When Reidy and Flanagan hit a couple of points in quick succession to stretch Limerick’s advantage to seven points by the 60th minute, you just knew they weren’t going to lose it from there.

Tipperary ran out of ideas in the end, as a succession of long-balls either went harmlessly wide or were hoovered up by the Limerick full-back line.

Limerick finished with a fitting flourish when Flanagan fired a shot to the top corner of the net as if to emphasise just how dominant they had been.

On the evidence of this performance, they’re warm favourites with very good reason to lift the Liam MacCarthy Cup in 2020.

Tipperary will hope they can rally just like they did last year after losing heavily to Limerick in the Munster Final, but, on the evidence of this match, retaining their title is now a very big ask. 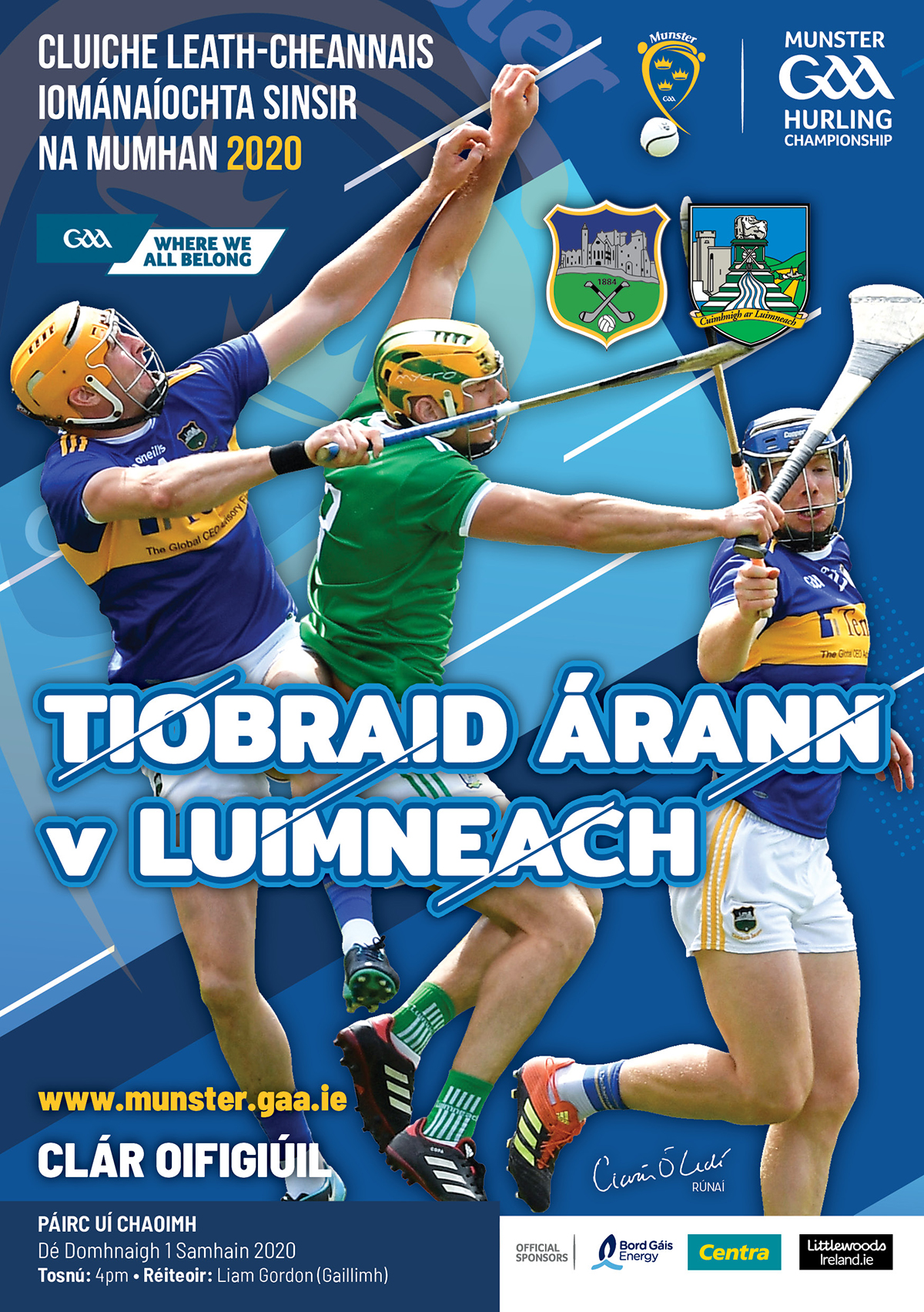 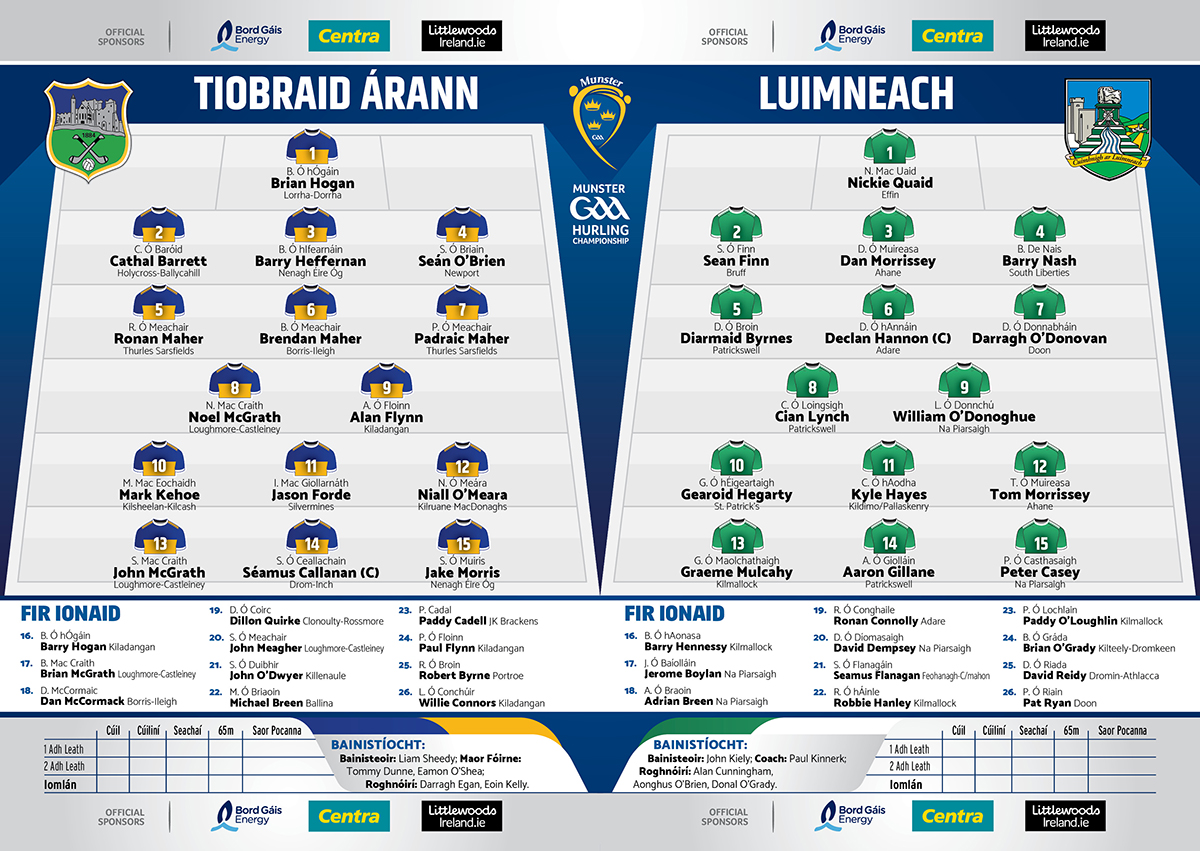 The Tipperary senior hurlers head to Páirc Uí Chaoimh on Sunday, November 1st, to play Limerick in the Munster SHC Semi-Final where throw-in is at 4pm. Also on Sunday, the Tipperary senior footballers will play Clare in the MSFC Quarter-Final at 1pm. https://t.co/kiIravzJYT pic.twitter.com/JwC1W5h4Pi