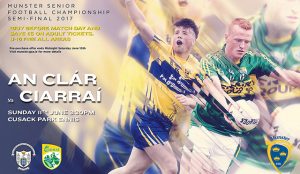 Kerry defeated Clare by 1-18 to 1-12 in the Munster Senior Football Championship Semi-Final on Sunday June 11th at Cusack Park Ennis.

Report By Peter O’Connell for GAA.ie

Munster champions Kerry eventually qualified for a Munster final meeting with Cork on July 2, when they held off Clare in Cusack Park, Ennis.

While the first half was a good battle, Kerry upped their game considerably in the last 25 minutes and outscored Clare 1-10 to 0-7 during the second period. Following a first half, which featured seven yellow and one red card, the teams were tied at half-time, Clare 1-5 Kerry 0-8.

Gary Brennan set the tone right from the throw in when the Clare captain cut through the Kerry defence from the throw in. He laid off to David Tubridy who fired over a sublime, left footed point. When Tubridy goaled a 13th minute penalty, which was won by Keelan Sexton, Clare led 1-3 to 0-2. Jamie Malone added a point to extend Clare’s lead by the 18th minute.

However Kerry, who had the breeze, fought their way back into it with four James O’Donoghue points, while Paul Geaney added two. Kerry were reduced to 14 players when Donnchadh Walsh was shown a second yellow, a minute before half-time, when the wing forwarded fouled Clare’s Martin McMahon. Kerry briefly led, but Ciaran Russell, attacking from wing back, equalised just before the interval, leaving the 5,786 attendance that a possible shock was on.

That belief deepened when Clare put over the opening two points of the second half with Eoin Cleary and Cathal O’Connor firing over frees won by Gary Brennan. However, the game turned on an incident nine minutes into the second half when a Jamie Malone shot hit the Kerry crossbar and ended up spinning wide. At that stage Clare led 1-8 to 0-10 and a goal at that juncture, would have rattled Kerry further.

Kerry responded with a flurry of points from James O’Donoghue, Stephen O’Brien, Anthony Maher and Shane Enright. Stephen O’Brien, who impressed after being introduced at half-time, netted Kerry’s goal three minutes from full-time. While Clare had an extra man, O’Brien walked through the heart of the Clare defence before goaling.

Kerry showed their experience when a lesser team could have panicked. While Gary Brennan was outstanding in the first half, Jack Barry came more into in as the game developed, while James O’Donoghue looked very sharp from play and frees for Éamon Fitzmaurice’s team. Anthony Maher also had a good spell in the second half, which played a key role in helping Kerry to establish control.

This is an unreserved fixture.

They meet for the third time in a year, having clashed twice in the 2016 championship, with Kerry winning both the Munster semi-final and All-Ireland quarter-final.

*Clare last reached the Munster final in 2012, which was also the last time Kerry failed to reach the final.
*Kerry are having their first outing in this year’s championship while Clare have already beaten Limerick by 1-13 to 1-12 in the quarter-final. Eoin Cleary scored 1-4 (0-2 frees) and David Tubridy 0-4 (0-2 frees) for the winners.
*Kerry go into the championships as Allianz League (Division 1) winners for the first time since 2009, a year they also won the All-Ireland title. They did not win the Munster title that year, losing the semi-final to Cork in a replay.
*Eamonn Fitzmaurice is in his fifth season as Kerry manager; Colm Collins takes charge of Clare for a fourth season.

Don’t forget to pick up a copy of Sunday’s Souvenir Match Programme.

Clare’s last win over Kerry in the championship was in the 1992 Munster final. Prior to that, they hadn’t beaten the Kingdom since 1949.