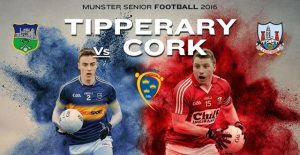 Tipperary defeated Cork by 3-15 to 2-16 in the Munster Senior Football Championship Semi-Final on Sunday June 12th at Semple Stadium Thurles.

Tipperary stunned Cork in Thurles this afternoon to book a first Munster final appearance in 14 years, writes Eoghan Cormican of the Irish Examiner.

Not since 2002 have Tipperary been present on Munster football final afternoon and one has to go all the way back to 1944 to locate the last occasion a Tipperary team defeated Cork in the football championship.

Liam Kearns’ men were full value for the win, but had to withstand a nervy final 10 minutes, during which Cork bombarded the opposition goal. The step up in Cork’s play was a direct product of an incredible two-minute spell where Tipperary hit their opponents for 1-2. Brian Fox bagged Tipperary’s third goal on 60 minutes following a poor Ryan Price kick-out.

The ensuing kick-out also went wrong and was punished by Fox to put Tipperary 3-13 to 1-10 in front. Cork then set about launching the comebacks of all comebacks, Peadar Healy’s men hitting 1-6 without reply in a nine-minute spell to level the game at 3-13 to 2-16 one minute from the end of normal time.

Kevin O’Halloran held his nerve to slot a ’45 one minute into injury time after Price had saved an Ian Fahey goal effort. And Tipperary were out the gap when O’Halloran slotted his third free on 73 minutes.

Cork, despite playing with the benefit of a slight breeze in the opening period, found themselves in serious bother at half-time – the hosts enjoying a 2-7 to 0-6 lead.

Tipperary’s opening goal arrived at the end of the first quarter, Brian Fox creating the chance with a searing run down the left wing. The Tipperary half-forward, having drawn a number of Cork defenders, offloaded to Conor Sweeney and he finished to the net following a neat sidestep.

Tipperary, in truth, should been celebrating a second green flag by this juncture after Robbie Kiely had won them a seventh-minute penalty. Peter Acheson assumed responsibility, but his tame effort was saved by Ryan Price.

Sweeney’s major put the underdogs 1-4 to 0-3 in front and while Cork outscored them 0-3 to 0-2 in the subsequent quarter of an hour, Tipperary put significant daylight between the teams when Quinlivan goaled on 33 minutes. Brian Fox was again central to the score with yet another superb burst.

A Michael Quinlivan point thereafter had Tipperary 2-7 to 0-6 to the good at the break and despite seeing this lead fluctuate in the second period, they just about held on.

Ticket Information
Adults: €15
Student’s/OAP: Purchase Adult tickets and receive a €5 concession at designated turnstiles prior to entry
Under 16’s: Free
The O’Riain Stand only will be opened for this game

The Tipperary Senior Football team to play Cork in the Munster Senior Football Championship Semi-Final in Semple Stadium, Thurles, next Sunday, June 12th, at 3.30pm has been announced by manager Liam Kearns. Aside of positional changes, it is the same starting XV that lined out in Tipperary’s quarter-final win two weeks ago.

The Cork Senior Football to play Tipperary next Sunday has been announcedhttps://t.co/UBdF8qeT0K

TIPPERARY v CORK
It hasn’t been an especially busy rivalry in recent times – this will be only the fifth championship clash between the counties in 21 years – but they did meet two years ago when Cork were stretched to the limit before winning by two points in Pairc Ui Chaoimh.

HOW THEY HAVE FARED SO FAR IN 2016
Cork were relegated from Division 1, finishing second last after winning three and losing four games. Tipperary finished sixth in Division 3 (2 wins, 3 draws, 2 defeats) before beating Waterford by 1-15 to 1-7 in the Munster quarter-final.

MANAGEMENT
Peadar Healy (Cork) and Liam Kearns (Tipperary) are both in their first seasons.

DID YOU KNOW?
Tipperary’s last win over Cork in the Munster football championship was in 1944.

THE ROAD AHEAD
The winners play Kerry or Clare in the Munster final on July3; the losers enter Round 2 of the All-Ireland qualifiers.