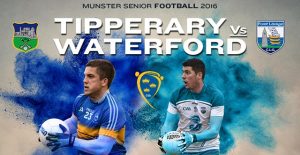 Tipperary defeated Waterford by 1-15 to 1-7 in the Munster Senior Football Championship Quarter-Final on Sunday May 29th at Fraher Field Dungarvan.

By Thomas Keane at Fraher Field, Dungarvan for GAA.ie

Liam Kearns Tipperary side produced a strong second half display to beat Waterford at Fraher Field. It was the home side that started the stronger racing into an early three point lead inside six minutes with all of Waterford’s scores coming from the boot of Paul Whyte, two of which were from placed balls.

Tipperary hit their first score of the game on seven minutes through the impressive Michael Quinlivlan and as the game entered its second quarter they became the stronger of the two sides and at the break they were 0-8 to 0-6 in front.

A crowd of 1,753 saw the first goal of the game on 48 minutes. A long ball in around the Waterford goal was met by the fist of Quinlivlan which came back off the Waterford crossbar and hit off the unlucky Maurice O’Gorman and past Stephen Enright to give Tipperary a 1-11 to 0-6 lead.

Waterford hit back with a goal on 58 minutes Whyte finishing to the net following a pass from Joey Veale but this was as good as it got for the home side as Tipperary ran out comfortable eight point winners and now go on to meet Cork in the Munster semi final.

Ticket Information
Adults: €15
Student’s/OAP: Purchase Adult tickets and receive a €5 concession at designated turnstiles prior to entry
Under 16’s: Free

The Tipperary panel for the Munster Senior Football Championship Quarter-Final against Waterford on Sunday next, May 29th at 3.30pm in Fraher Field, Dungarvan, has been announced by manager Liam Kearns. Liam has handed championship debuts to two of last year’s U21 Munster Championship winning side, Bill Maher and Josh Keane in what will also be Liam’s first championship match in charge. The panel lines out as follows –

The Waterford Senior Football team to play Tipperary is as follows –

THE ROAD AHEAD
The winners play Cork in the Munster semi-final on June 11/12; the losers head for the qualifiers on June 25.

MANAGEMENT
Tom McGlinchey (Waterford) is in his second season while Liam Kearns (Tipperary) in his first campaign.