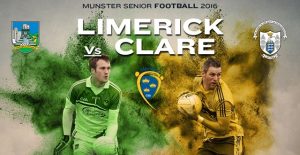 Clare defeated Limerick by 0-16 to 0-13 in the Munster Senior Football Championship Quarter-Final on Sunday May 29th at the Gaelic Grounds Limerick.

By Eoin Brennan at Gaelic Grounds for GAA.ie

Clare secured their third consecutive Championship derby victory over Limerick to return to the last four in Munster in front of an attendance of 3,343 at the Gaelic Grounds.

The Allianz Football League Division Three winners eventually held off the stubborn challenge of their hosts to secure a semi-final spot away to Kerry in a fortnight’s time. It was far from the intensity and flair of their recent Croke Park title victory though as the dead heat of the Gaelic Grounds produced a dour opening before finally sparking to life in a seesaw second half.

Clare’s 0-5 to 0-4 interval advantage masked a low key half in which the sides shared 14 wides, eight of which crucially came from the hosts who started in impressive fashion but found it difficult to turn their superiority into scores.

With captain Ian Ryan unerring from frees, the home side did open up a 0-3 to 0-1 advantage by the 15th minute, but that was as good as it got for Limerick as Clare finally cranked into gear with four of the last five points of the half including an inspirational effort from substitute Podge Collins to edge his side in front.

Clare maintained that form for the new half, with the opening two points through Keelan Sexton and Eoin Cleary to push three clear. Despite the best efforts of Ryan who kicked five frees to keep his side in touch, the Banner County displayed the better balance with seven different second half scorers including three points from Jamie Malone to return to the Munster semi-final for the fifth successive season.

Clare see off Limerick to go through to Munster semi-final https://t.co/b9gb4TpTtT pic.twitter.com/b0E6Zk7Kvk

Ticket Information
Adults: €15
Student’s/OAP: Purchase Adult tickets and receive a €5 concession at designated turnstiles prior to entry
Under 16’s: Free

MOST RECENT CHAMPIONSHIP GAME
Clare 0-15 Limerick 0-13 (2015 Munster quarter-final, Ennis)
Clare led by five points at half-time but Limerick fought back in the second half and cut the margin to a point late on before Clare kicked another point to edge home by two.

MOST RECENT COMPETITIVE GAME
Clare 1-14 Limerick 0-11 (Allianz FL Div 2, Newcastlewest, 28 February 2016)
David Tubridy scored 0-6 for Clare while Ian Ryan countered with 0-5 for Limerick but the Banner took both points after leading by six at half-time.

DID YOU KNOW?
It’s 21-10 in Clare’s favour with five draws from the previous 36 championship games between the counties.

THE ROAD AHEAD
The winners play Kerry in the Munster semi-final on June 11/12; the losers head for the qualifiers on June 25.

MANAGEMENT
Both Colm Collins (Clare) and John Brudair (Limerick) are in their third seasons.