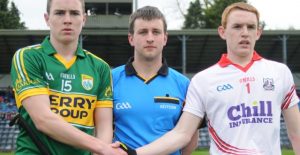 By Therese O’Callaghan for the Irish Examiner newspaper

Cork had far too much firepower for Kerry in Páirc Uí Rinn last night, setting up a Munster MHC semi-final at the end of June with the winners of tonight’s game between Limerick and Tipperary. With just three players on view from last year’s defeat to Waterford — captain Patrick Collins, Shane O’Brien and Alan O’Callaghan — the management team of Denis Ring and Mark Landers had to be happy with their new-look side. However, Ring acknowledged tougher tests are to come.

“We have a serious task ahead of us now, Limerick or Tipp,” he said. “There is no back door there. We might have preferred a better draw. Limerick are hammering the daylights out of everybody. We would be away against Limerick and if it is Tipp we are at home. But at this point and time Limerick would appear to be very strong. The next game for us is winner takes all. We have just one match to get it right. Unfortunately, it is going to be the difference between hurling in August and not.

“We have put in a phenomenal effort and we are happy with the display tonight. But the next nine weeks are very serious for us. We have a lot of matches lined up and we will also go back to our gym programme.”

Cork led 1-14 to 0-3 at half-time with Eoghan Keniry netting eight minutes before the break. The Rebels took over in the second half with further majors from Keniry, sub Billy Dunne and Luke Meade (2). Inside forwards Keniry and Sean Hayes are impressive ball-winners and will prove a handful for any full-back line. Luke Meade and Dayne Lee were also highly influential in an attack that found it all too easy.

It would have to be said — even though it was one-way traffic on the scoreboard — the visitors were far better than their nine-point return. Goalkeeper Stephen Murphy was superb between the sticks, centre-forward Michael O’Leary is an excellent hurler and was the scorer of two superb points from play, while Jack Goulding — despite wearing No 14 — roamed all over the pitch catching the eye many times. The Kingdom will meet Clare in a couple of weeks in a play-off game.

Where – Pairc Uí Rinn at 6.15pm (prior to Cadbury Munster Under 21 Football final)

Next Round – the winners will qualify for the Munster semi-final on June 25th or 26th where they will play the winners of the Limerick and Tipperary first round game. The losers will play the losers of Clare v Waterford on Wednesday April 23rd or 30th.

There is a discount of €5 on all adult tickets that are pre-purchased in SuperValu and Centra outlets and on tickets.ie

The Cork Minor hurling team to play Kerry has been named: http://t.co/0yQLrd5iKB

The Cork Minor Hurling team to play Kerry in the Munster Championship on Wednesday at 6.15pm at Páirc Uí Rinn will line out as follows:

Only three of Cork’s starting fifteen were involved in the extra time defeat to Waterford in last year’s Munster Championship: Shane O’Brien, Alan O’Callaghan and captain Patrick Collins, who is in his third year as a Cork Minor. All of the starting fifteen are in their final year at the minor grade. Cian Walsh, Seán Bourke, Eddie Gunning, Dayne Lee, Mark Dolan, Daniel Meaney, Seán Hayes and Eoghan Keniry were part of the 2013 U17 Rebel Óg Academy squad that won the Mallow Inter-County tournament. Luke Meade, Tomás O’Connor, Darren Browne and Seán O’Donoghue were also involved in that squad but were club-tied for the tournament.