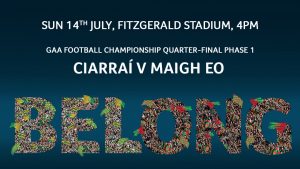 Kerry defeated Mayo by 1-22 to 0-15 in Group 1, Phase 1 of the GAA Football All-Ireland Senior Championship on Sunday July 14th at Fitzgerald Stadium, Killarney.

Report By Colm Gannon at Fitzgerald Stadium for GAA.ie

Kerry showed they are serious All Ireland contenders with a devastating display against Mayo in Killarney. Just under 32,000 paid in to see Peter Keane’s men take apart Mayo right from the start and run out 10 point winners in blistering sunshine.

Kerry came into this game with a game plan and the stuck to it from the off – the pushed up on the Mayo kick-out and laid the foundations for a nine point half time lead. Sean O’Shea and David Clifford did most of the damage on the scoreboard combining for nine first half points with O’Shea bagging five of of them.

The opening exchanges were even enough with Kerry leading 0-4 to 0-3 at the break thanks to two Clifford points along with a O’Shea free and one from Paul Geaney, with Mayo responding through scores from Keegan, Darren Coen and Cillian O’Connor.

But from then on it was all Kerry as they outscored Mayo by nine points to one from the eighth to 33rd minute with O’Shea and Clifford putting on an exhibition of shooting as Kerry won possession from Mayo’s kick-outs with ease and worked the ball brilliantly from the middle of the field to attack.

Mayo did manage to tag on a couple of late points, but Kerry responded in kind with Stephen O’Brien and Geaney slotting over points to leave their side leading 0-15 to 0-6 at the short whistle.

Mayo would have to start the second half like a house on fire and they did get the first score after the resumption of the action through Cillian O’Connor, but Kerry hit back quickly with Clifford and O’Shea tagging on points Darren Coen and O’Connor got a couple of more points for Mayo to bring the gap back to nine and then with 54 minutes gone O’Connor became the leading scorer in championship history with a close range free.

But Kerry drove the final nail in Mayo’s coffin two minutes later when Stephen O’Brien found himself in loads of space down the left hand side of the field and he cut inside before feeding it to Paul Geaney who palmed the ball home from close range.

The pace of the game dropped off after that and Mayo did get a run of scores with Andy Moran tagging on two after he came on and O’Connor having a chance of rattling the net from the penalty spot – only to see his effort well saved by Shane Ryan in the Kerry goal sending it high and over the bar for a point.

Kerry finished off the game with Clifford, Stephen O’Brien and Graham O’Sullivan tapping over points as the clock ticked down. All roads for both sides move to Croke Park next weekend – with Kerry facing Donegal, while Mayo will have to regroup and pick up a win against Meath to keep their chances alive before the final round of games.

Gates of the @fitzgeraldstad will be open at 2pm on Sunday for the @Kerry_Official v @MayoGAA Game. Entertainment will be provided by @CelticSteps1 from 2:30pm.
We advise all patrons to come early to avoid queues.#NothingBeatsBeingThere #LoveKillarney pic.twitter.com/ENtUokpsGW