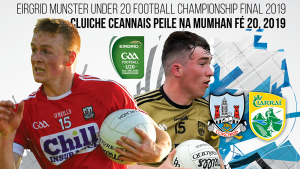 Cork defeated Kerry by 3-16 to 0-12 in the EirGrid Munster Under 20 Football Championship Final on Thursday July 18th at Páirc Uí Rinn.

Report By Ger McCarthy at Pairc Ui Rinn for GAA.ie

Keith Ricken’s charges were full value for their victory in front of 2,758 spectators and denied Kerry a clean sweep of 2019 provincial football titles with a swashbuckling display highlighted by some terrific individual scores.

The Cork full-forward line of Mark Cronin, Cathal O’Mahony and Damien Gore were superb throughout and ably assisted by Colm Barrett and Blake Murphy on the 40’.

As for the Kingdom, they were coming off a straightforward semi-final defeat of Limerick and made one alteration to their starting line-up with Eddie Horan replacing Cathal Ferriter at centre-forward.

Cork were forced into three changes following their facile 31-point demolition of Waterford with Eanna O’Hanlon’s injury opening the door for Kanturk’s Daniel O’Connell to operate at midfield. Colm O’Callaghan was a late replacement for centre-forward Blake Murphy as was Sean Meehan for Shane Hickey.

Kerry’s Eddie Horan fired over the opening score but Cork’s response was immediate with Cathal O’Mahony landing a free before Damien Gore and Colm Barrett made it 0-3 to 0-1.

The Rebels didn’t let up, maintaining a high tempo and moving the ball swiftly through a porous Kerry defence. Cathal O’Mahony landed a monster score form distance prior to Mark Cronin twice splitting the posts and O’Mahony bringing the crowed to their feet with a marvellous score from the right side-line.

Kerry finally gained a foothold in midfield and Eddie Horan, Fiachra Clifford and Sean O’Leary efforts reduced the deficit. A scrappy spell saw goalkeeper Josh O’Keefe twice deny the Kingdom’s Eddie Horan a goal before the sides changed ends with Cork 0-10 to 0-6 ahead.

There was still four points between the sides when Cork conjured up a cracking goal early in the second period. Blake Murphy raced on to a hopeful ball and thundered an unstoppable shot into the top corner.

What a flick!! What a finish!! @OfficialCorkGAA's Blake Murphy finishes an unbelievable goal to the net. pic.twitter.com/1QpVFzKYkz

Additional Cathal O’Mahony, Damien Gore and Colm Barrett points added to Kerry’s misery as the Rebels played with a swagger and arrogance more accustomed to their opponents.

Cork’s win was never in doubt however and the winners finished with a flourish as Fionn Herlihy and Cathal O’Mahony rattled the net to complete their rout.

Fionn Herlihy with a lovely finish to the net. pic.twitter.com/sfkhOPRBVg

Cathail O'Mahony finishes off an unbelievable performance with a brilliantly worked goal for @OfficialCorkGAA. pic.twitter.com/YTwIthzkmO

Please note this is a general admission fixture.

Click here to buy tickets or tickets can be purchased via participating Centra or Supervalu outlets.

The Cork Team to play Kerry in the @EirGrid @MunsterGAA Under 20 Football Championship Final has been announced. https://t.co/HbqpEzfaB3 pic.twitter.com/6ezcKWDi39

Pick up a copy of the 32 page souvenir match programme on the day for 3 euro. 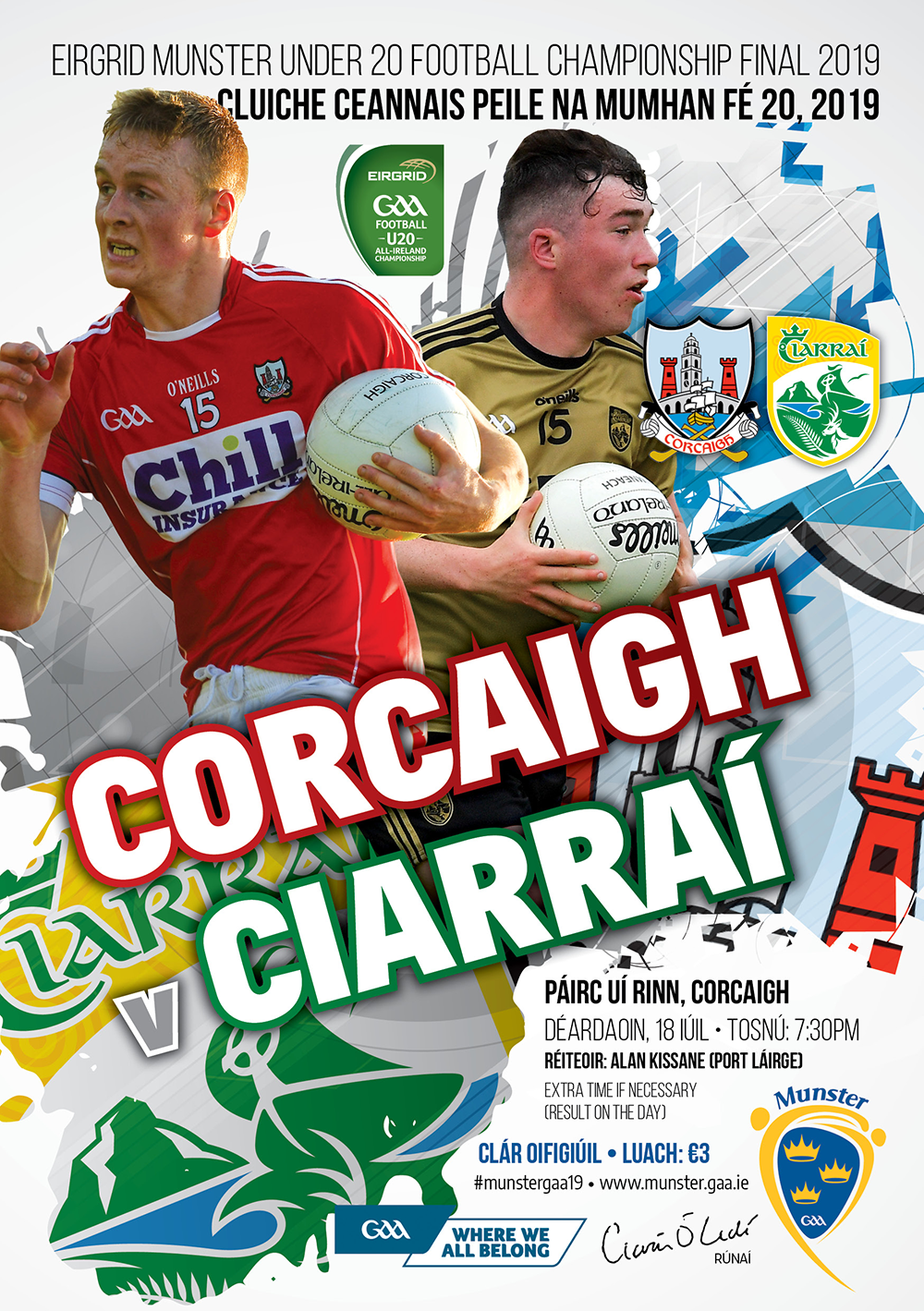