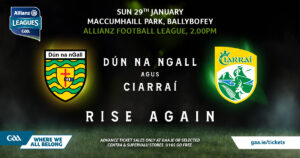 Donegal defeated Kerry by 0-13 to 1-9 in Round 1 of the Allianz Football League Division 1 on Sunday January 29th at Ballybofey.

Paddy McBrearty’s stoppage time point ensured the post-Michael Murphy era began with a victory for Donegal over the All-Ireland champions Kerry in Ballybofey.

Registering six wides and dropping one short in the second half, Kerry were wasteful here and a point would have been a fortunate return given how disappointing they were from the second quarter on.

A fisted point by substitute Donal O’Sullivan brought them level going into the closing stages but captain McBrearty, who had been quiet throughout, landed the winning score to the delight of the MacCumhaill Park crowd.

Donegal had made hay on Kerry’s kick-outs in the third quarter and having been 1-6 to 0-6 down at half-time drew level and also went ahead in the 44th minute. Paul Murphy ended a 20-minute barren spell to equalise for Kerry in the 49th minute but a Shaun Patton 45 in the 54th minute pushed Donegal ahead once more.

Substitute Ruairí Murphy squared the game for a fourth time in the 65th minute yet the home side responded with wing-back Caolan McColgan’s third point of the afternoon. O’Sullivan levelled matters but McBrearty was on the money with his shot from distance.

A significant crosswind made shooting difficult and Kerry missed three relatively easy chances in the first half. Debutant Darragh Roche earned a simple mark opportunity less than three minutes in but the elements pushed it wide. However, Roche was up and running with the first score of the game in the eighth minute and had three to his name by the end of the half.

After a couple of long-range Donegal scores, Murphy levelled the game in the 13th minute. From the resultant restart, Dara Moynihan stripped Brendan McCole, and kicked the opening goal of the game.

Two further Kerry points followed, one of them spawning from Kerry pressurising Caolan McColgan into giving up the ball. Conor O’Donnell ended an 11-minute scoreless spell for Donegal but Roche hit back with the next two scores and Kerry were a comfortable 1-6 to 0-3 up in the 25th minute.

However, that’s when their first-half tally ended as Donegal steadied themselves with three points before half-time. O’Donnell and Caolan McColgan added their second scores and Johnny McGroddy rounded off the half in additional time.