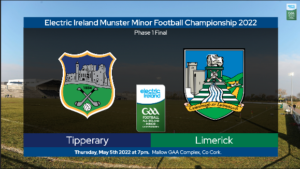 Tipperary defeated Limerick by 1-14 to 1-4 in the Electric Ireland Munster Minor Football Championship Phase 1 Final on Thursday May 5th at Mallow.

Tipperary turn up the heat to push past Limerick

Tipperary advanced in the Electric Ireland Munster MFC Phase 1 final at Mallow Thursday evening, and they will have home advantage when they play the losers of Cork and Kerry in the semi-final on May 19.

Victory went Tipperary’s way by seven points when they met Limerick in the group stage, This time they emerged with 10 to spare.

Tommy O’Connor opened the Tipperary account and by the 10th minute they moved three points to one up. Joe Higgins and Paddy O’Keeffe were dominant around the midfield area, and further points arrived through Higgins and Daithí Hogan.

Limerick, meanwhile, enjoyed their share of possession but could make no headway against a resolute Tipperary defence displaying superb blocking skills.

Tommy Ryan had to work extremely hard for Limerick’s second point in the 25th minute.

Just before half-time there was a huge let-off for the Premier County when Limerick were awarded a penalty after Luke Walsh was brought down by Ciaran Byrne. Tipperary goalkeeper Robbie McGrath saved Bobby Smith’s shot, however full-back Byrne received a black-card for the foul.

Free-taker Conall Grogan increased their advantage after the restart as Limerick’s Paddy Downey got a black card in the process.

The Shannonsiders put themselves back in contention when Aidan O’Shea – switched into full-forward – netted in the 33rd minute.

Their joy was short-lived as Fionn Fitzgerald found the net five minutes later, 1-8 to 1-2.

Tipperary upped their performance once more. They outfought Limerick six points to two with some excellent scores from Hogan.

This game will be live streamed by Munster GAA.

The Tipperary Minor Footballers play Limerick in the phase 1 final tomorrow Thursday May 5th in Mallow at 7pm and Manager John McNamara has announced the following team and subs for the game. pic.twitter.com/hm3p3O0ZdF