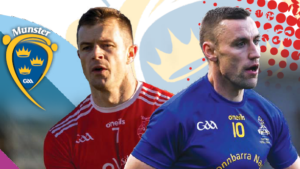 Our Top Moments of the Match as St Finbarr's defeat Eire Og Inis in the Senior Football Munster Semi-Final. Final score 2-14 to 0-12. The Barr's now advance to the Munster Final where they will face Austin Stacks.@MunsterGAA @the_Barrs @OfficialCorkGAA pic.twitter.com/LmL3tdZ3Bl

St Finbarr’s will contest a first Munster club football final since 1986 next month after quashing a spirited third-quarter fightback from Éire Óg Ennis.

Ahead by 2-7 to 0-4 turning around for the second period, the Barrs advantage stretched into double-digit territory when Stephen Sherlock converted a 32nd minute free.

There followed a determined third quarter from the Clare visitors, who kicked six of the game’s next seven points, including a four-in-a-row of white flags, to stand five off their opponents at the second water break.

On target for the Ennis outfit during this spell of supremacy was Gavin Cooney, Philip Talty, Conall Ó hAiniféin (0-2), Darren O’Neill, and Eimhin Courtney. And when Cooney (free) and Mark McInerney added further points early in the final quarter, the gap was down to four, 2-10 to 0-12.

That, however, was as close as the Clare champions got, the Barrs registering the last four points of this semi-final to run out deserving eight-point winners.

Sherlock had the radar locked in on the run to the line, the inside forward responsible for the final four points, two of those difficult frees from out on the sideline. The 24-year-old finished with 0-9 to his name.

Conor McCrickard’s two first-half goals were the difference at the break, both green flags coming about from perfectly weighted passes.

The game’s opening goal arrived 12 minutes in, Stephen Sherlock spotting the untracked run of McCrickard inside the cover and then delivering the ball, gift-wrapped, into the hands of the adopted Barrs man with a quickly taken free.

His second, on 26 minutes, stemmed from a superbly floated Colin Lyons pass that took out the last Ennis defender Manus Doherty and left McCrickard one-on-one with opposing ‘keeper Nathan Murray who he duly rounded.

This second Barrs goal was part of an unanswered 1-3 which the Cork champions struck for while captain and county final man of the match Ian Maguire was in the sin bin. It was a most dubious black card for Maguire, but one that in no way affected Paul O’Keeffe’s side who outscored the Clare winners 1-3 to 0-1 while operating with a man less.

Maguire’s first involvement upon his return inside the whitewash was to win a scorable free which Sherlock converted for his third white flag of the half to shove the Barrs 2-7 to 0-4 in front.

Cillian Myers Murray was the other dangerman in the Barrs attack during the opening period, supplying two fine points from play.

Éire Óg had started much the brighter, but bar kicking the game’s opening two scores, their early intent was not reflected on the scoreboard.

A spirited third quarter ensued from the men in red, but four was as close as they managed to come of their opponents. Their woes were compounded late on when midfielder Darren O’Neill received a second yellow card. Referee Brendan Griffin was by no means shy in reaching for his book, their semi-final contest seeing two players from either side picking up black cards throughout the hour.

The Barrs will meet Kerry champions Austin Stacks in the Munster final on the weekend of Jan 15/16.

This game will be streamed live by Clubber at a cost of 10 euro – follow the instructions below to sign-up to view the stream of the game of your choice.

Don’t forget to pick up a copy of Sunday’s match programme at Páirc Uí Rinn at a cost of 2 euro.