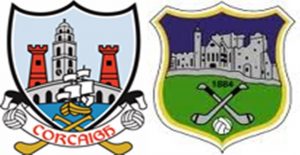 Cork defeated Tipperary by 3-19 to 0-14 in the 2020 McGrath Cup Football on Thursday January 2nd at Mallow.

A second victory for another experimental Cork side in round 2 of the McGrath Cup in Mallow last night.

The result, in front of a crowd of 791, and following last weekend’s big win over a youthful Kerry side, leaves them top of Group B and in the final against Limerick tomorrow week.

A first-half hat-trick of goals from Michael Hurley was the highlight of this encounter and the Castlehaven man, who was substituted in the second half, finished with an impressive 3-4.

“They are better than any training. You want to get minutes into guys ahead of the league. It is the best opportunity for guys trying to make the panel which we have to cut in the next week or so.

“This is my third year now and we will always play in this competition. We have used 40 players in the two matches.

“We have another game next week, against Limerick, which will get more minutes into fellas again. We will try and settle the team down a small bit with a view to the Offaly game (league) which is coming very quickly. Realistically that game next week will be our last competitive game. I would say you will see some semblance of our team for that game.

We’ve had a great bunch of players, great attitude. They are getting quality coaching and quality strength and conditioning. Even for those who don’t make it, they have the experience of being in this set up for a number of weeks and playing games.

All Cork’s scores in the opening 35 minutes were from play, and all of the Tipperary points were from frees. Tipperary’s first point from play arrived 12 minutes into the second half from Jason Lonergan.

Cork, who had five of the successful U20 team in their starting line-up, were clued in from the off. Hurley was straight into the action with a brace of points on the board inside three minutes. Stephen Sherlock, Cian Kiely, and Colm Barrett were among a nifty forward line that pushed them seven points to nil up after 10 minutes.

For the third goal five minutes from the interval, Mark Collins fed the industrious Hurley. The hosts came near to a fourth goal but Sherlock’s effort went across the goal and wide.

Tipperary’s five points were shared between free-takers Sean O’Connor and Liam Boland and they trailed 3-11 to 0-5 at the break.

The second half was an improvement from Tipperary, with Cork adding eight points. Liam Boland emerged top scorer with seven points and the visitors closed with a couple of scores from open play.

“The second half got a bit ragged,” McCarthy said. “This time of the year fellas’ levels aren’t what they should be and we had five changes made early in the second half.

“Games can become a bit disjointed but you are looking at endeavour and attitude. There were some fine individual performances, so all in all, we are very happy with the workout.

“Tipperary are down a few of their key players. Once the league starts, teams refocus and regroup and that becomes the next priority.”

The Premier men play Kerry in Clonmel on Sunday in a dead rubber match. Cork and Tipperary will meet again in the Division 3 league.