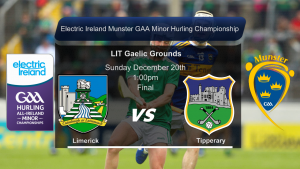 Limerick defeated Tipperary by 2-22 to 0-25 after extra time in the Electric Ireland Munster Minor Hurling Championship Final at the LIT Gaelic Grounds on Sunday December 20th.

#GAANOW has the highlights from a hard fought battle in the @ElectricIreland #GAA @MunsterGAA MHC Final. Both sides finished level and after extra-time, @LimerickCLG defeated @TipperaryGAA to retain the title! pic.twitter.com/p7fVpv02wv

Another day of celebration for Limerick hurling, as the defending champions claimed back-to-back Electric Ireland Munster MHC titles at the LIT Gaelic Grounds.

Seven days after their All-Ireland senior victory, the conveyor belt keeps on rolling.

Appearing in their seventh final in eight years, this latest win came after surviving a mammoth battle with Tipperary, while also securing their ninth title overall.

Tipperary, who were dealt a huge blow at the end of the first half losing their goalkeeper and full-back to injury, battled bravely and it was their sub Kenny Lee who tied proceedings at the end of normal time, 2-14 to 0-20.

The hosts came good in the first period of extra-time when brilliantly led by their captain Adam English they outscored Tipperary seven points to two.

They maintained that dominance to run out victors by three points in the end.

There was one change to the Limerick team that defeated Cork in the semi-final with Liam Dennehy replacing the injured Dylan Lynch. They were also able to call on the experienced English, Ronan Lyons, Liam Lynch, Patrick O’Donovan and Ethan Hurley who all featured in last year’s provincial victory over Clare.

Two changes were made to the Tipperary side that overcame Waterford in their penultimate round – David Fogarty and Philly Hayes replacing Stephen Ferncombe and Jamie Duncan (injured).

Tipperary opened up a three-point gap after six minutes courtesy of free-taker Jack Leamy (2) and Sean Kenneally. Limerick had to wait until the seventh minute for Shane O’Brien to start their scoring.

They worked their way back into contention and by the end of the first quarter, they drew level through John Kirby. A point from O’Brien followed, and then came the crucial score of the half when Patrick O’Donovan rounded his marker to fire to the net, 1-5 to 0-4 on 17 minutes.

In spite of missing a couple of easy frees, the Premier County hit back, outscoring their opponents three points to one, but their rhythm was upset when they lost their goalkeeper Jason O’Dwyer to injury after a collision with his own full-back Robert Doyle.

Doyle, himself, had to leave the field before half-time, feeling the effects of the clash.

English and Liam Lynch (2) swapped points with Sean Kenneally, Leamy and Peter McGarry (65) to leave the half-time score, 1-9 to 0-10 in Limerick’s favour.

Limerick maintained the upper hand at the start of the second-half through three Lynch frees. However, Tipperary produced a brilliant five minutes before the water-break to take the lead by the minimum with scores from David Fogarty (2), Leamy (2) and a real beauty from Darragh Stakelum, 0-16 to 1-12.

The scores dried up somewhat after the water-break, significantly though Tipperary kept their noses in front through wing-back Luke Shanahan.

Not finished yet, Limerick pounced for a second goal when English set up sub Eoin Harmon and he made no mistake, 2-13 to 0-18, and three minutes of regulation remaining.

In the two minutes plus of stoppage, it was another sub, this time Kenny Lee who pointed. Deadlock, 2-14 to 0-20.

Limerick recorded double the amount of wides as Tipperary (10-5).

The first period of extra-time saw Limerick, spearheaded by English, move 2-21 to 0-22 in front.

In the second period, with players going down with cramp, they held out for the victory.

IT MATTERED: Home advantage (Limerick won the toss) was a help. The strength in depth of their evolving panel. Eoin Harmon’s goal testament. Adam Fitzgerald was introduced and he wasn’t on the match-day 24 for the semi-final.

SIDELINE SMARTS: This game could have gone either way. Limerick’s showed composure and that is what won it in the end. They had five of last season’s winning team on their starting 15.

MAN IN THE MIDDLE: Decision-making is not easy in winter conditions. At the end of regulation, Tipperary argued that sub Stephen Ferncombe scored a winning point but play was called back judging him to have gone over the sideline.

WHERE NEXT: All-Ireland semi-final against Galway in early January.

'It is easy convince lads with a Limerick jersey they should be winning tight games' https://t.co/PZFrH6h7ll

Click here to purchase your stream in advance for 8 euro 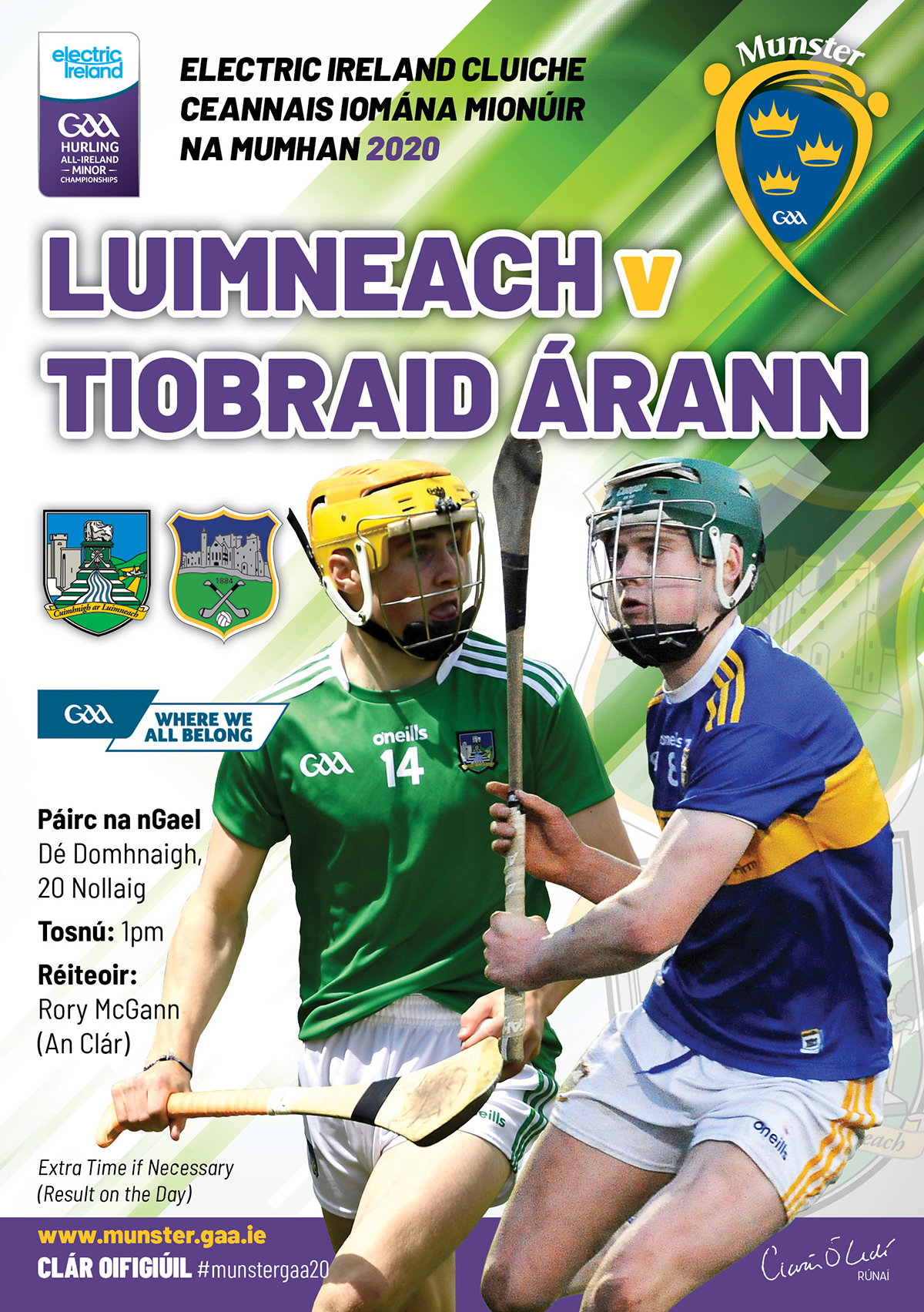 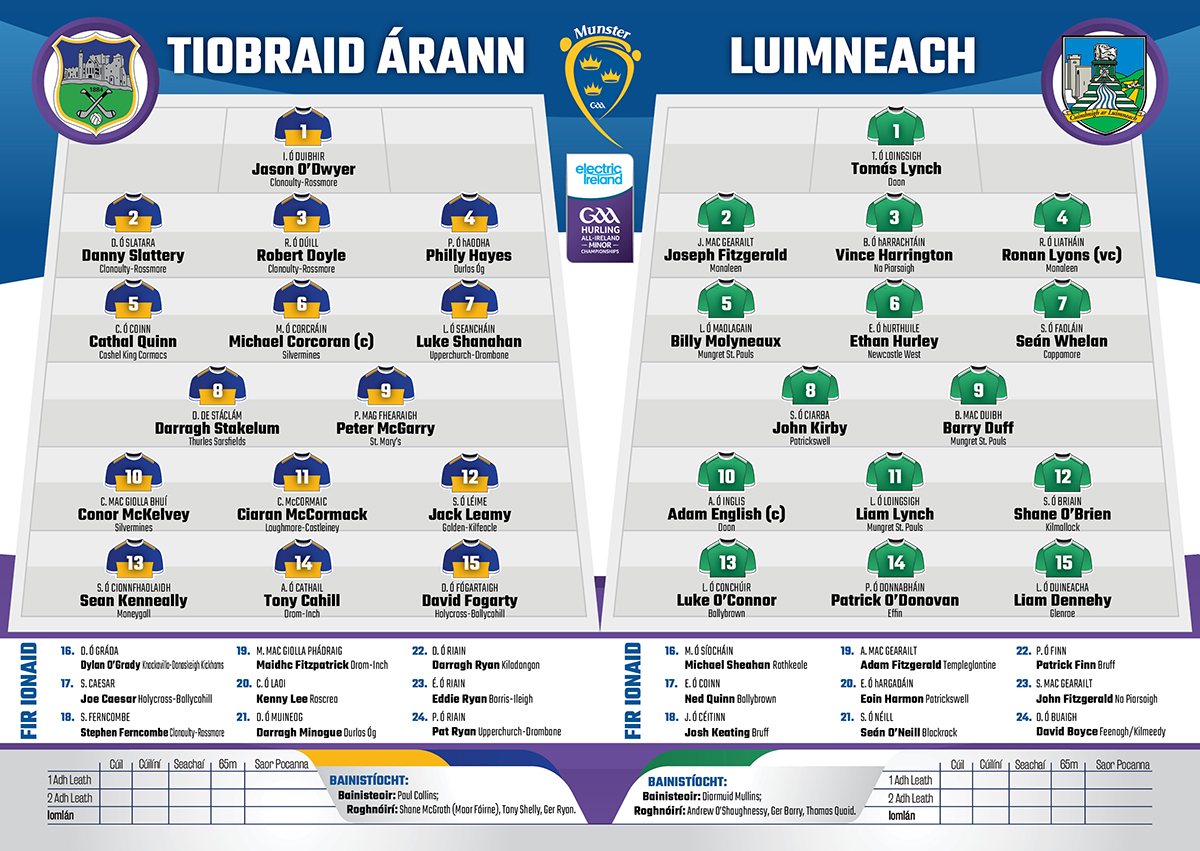 This game will be streamed live by Munster GAA.https://t.co/IsZJiztBiW pic.twitter.com/Fjjp9tVrpz