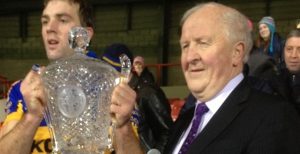 Tipperary defeated Clare by 4-22 to 3-11 in the Waterford Crystal Cup Hurling Final on Friday February 7th at the Gaelic Grounds Limerick.

Maher on the double as Tipp crush Banner

TIPPERARY captured the Waterford Crystal Cup for the second time in three years at the Gaelic Grounds in Limerick, defeating reigning champions Clare in front of 1,248 spectators. Tipp were the more consistent side on the night and deserved their win, whereas All-Ireland kingpins Clare, who began with eight starters from last September’s final, only played in fits and bursts. When Eamon O’Shea’s charges knuckled down after the break they ran out easy winners.

An entertaining opening half saw Clare go in a point ahead (3-5 to 1-10) at the break, thanks to a trio of goals in a spectacular five-minute spell. With Tipp dominating and leading by 1-8 to 0-4, thanks to a Michael Heffernan goal in the 24th minute, the Banner came thundering back with goals by John Conlon, Tony Kelly and Conor McGrath, plus a Peter Duggan point to overhaul their opponents.

Tipp recovered, however, and by the interval whistle had reduced the deficit to a point with scores from Conor O’Brien and Heffernan. Banner boss Davy Fitzgerald could not have been happy with his side’s tally of seven wides in the first half but the hat-trick of goals in such a short space of time must have gladdened the Sixmilebridge man.

A good burst by the Tipperary men yielded a goal and three points within four minutes of the restart, Conor Kenny rattling the Clare net in the 38th minute to restore their lead. As the half progressed, Tipp got a hold on their opponents and dominated proceedings.

Centre-forward Seamus Callanan was unerring from placed balls and fellow front men Denis Maher and Michael Heffernan proved to be a handful for the Clare defence. Tipperary got into their stride 13 minutes into the half when Denis Maher found the back of the Clare net following a fine handpass by Callanan.

This score put the Premier county in the driving seat and pushed them 3-14 to 3-9 in front. Maher forced another green flag six minutes later when, after a magnificent solo run and pass by centre-back Thomas Stapleton, he drilled past Pa Kelly in the Clare goal. The deficit proved a bridge too far for the All-Ireland champions as Tipperary ran out easy winners and claimed the first trophy of the year in Munster.

Eamon O’Shea’s Tipperary beat Clare by 14 points, 4-22 to 3-11, at the Gaelic Grounds this evening to win the Waterford Crystal Cup. The Premier County romped to an ultimately comfortable victory as they overturned a one-point half-time deficit against the All-Ireland champions. Denis Maher bagged two second-half goals for the Premier County, after Conor Kenny had netted in the 38th minute.

Michael Heffernan scored Tipp’s first-half goal but Clare bagged 3-01 within five minutes to help establish a 3-05 to 1-10 interval lead. 1,248 spectators watched on a rain-sodden evening as Tipp produced a powerful second-half performance to regain the title they last won in 2012.

In the third successive Waterford Crystal Cup final between the counties, Tipp turned up the heat after half-time to blow away Davy Fitzgerald’s Banner men. Clare held that slight half-time advantage but they were outscored by 0-06 to 3-12 in a one-sided second period.

In the first half, Tipp led by 0-08 to 0-04 when Heffernan’s scrappy 24th-minute goal put real daylight between the sides. Thomas Stapleton’s lengthy delivery stuck in the Clare goalmouth and as goalkeeper Patrick Kelly attempted to clear, Heffernan bundled the ball home.

On an evening when Clare lined out with eight of the team that started last year’s All-Ireland final replay win over Cork, Tipp enjoyed an encouraging early-season success ahead of next Saturday evening’s opening Allianz NHL Division 1A clash with Waterford.

Clare’s cause wasn’t helped tonight either by a tally of 12 wides – including seven in the first half when they were on top.

But Clare did show why they were so deadly last year by opening up with a quickfire run of scores. John Conlon, 2013 Hurler of the Year Tony Kelly and Conor McGrath raised green flags to hand Fitzgerald’s men the whip hand. Conlon struck in the 26th minute before Kelly and McGrath registered goals within 60 seconds of each other.

Tipp responded with the closing two points of the first half to remain very much in touch and they were relentless in the second period, outscoring the Banner men by 3-12 to 0-06. Conor Kenny netted a 38th minute goal for the winners before Denis Maher bagged a brace. The Thurles Sarsfields man cracked home a fine 48th-minute goal and he struck again six minutes later.

Saturday’s final between Tipperary and Clare will mark the fourth time in the last six years that they have met in the Waterford Crystal Cup Final. In 2009 at Ogonnolloe, Clare were successful on a scoreline of 1-12 to 1-7 in front of an attendance of 1,237. In 2012 at Sixmilebridge, Tipperary secured the cup with a 1-21 to 2-12 victory. The winning score was repeated last year when Clare won by 1-21 to 1-13 at Semple Stadium.

Since the Waterford Crystal Cup began in 2006, Clare (19 wins) and Tipperary (18 wins) have the most wins in the competition.

Tipperary hold the record for the longest winning streak in the Waterford Crystal Cup since the competition began under that guise in 2006 when they won 10 consecutive matches between 2007 and 2009.

Since the Waterford Crystal Cup began in 2006, there has been just 1 draw – the 2012 Limerick v Clare Quarter-Final after two periods of extra time.

Clare are the only team who have won at least one game each year since the Waterford Crystal Cup competition began in 2006.