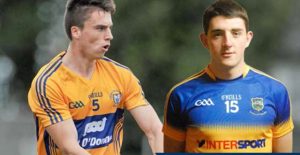 Tipperary defeated Clare by 0-15 to 0-7 in the EirGrid GAA Football Under 21 Munster Championship Semi-Final on Wednesday March 18th at Semple Stadium Thurles.

Tipperary are through to a third successive EirGrid Munster U21 Championship final against Cork. The Premier County beat Clare by eight points in this evening’s semi-final at Semple Stadium to set up another joust with the Rebels on April 8.

Jason Lonergan scored 0-5 for Tipp as they came good late on to get past the dogged challenge of the visitors. Tipp were 0-7 to 0-4 clear at half-time, as Clare failed to register from play until four minutes after the break. Tipp had nine different scorers on the night as senior panellist Jamie Malone was the only Clare player to score from play.
***
Scorers for Tipperary: J Lonergan 0-5, L Casey & S O’Brien 0-2 each, C O’Riordan, B Maher, I Fahey, P Maher, J McGrath & J Keane (f) 0-1 each.

By Jackie Cahill for the Irish Examiner newspaper

Tipperary 0-15 Clare 0-7: Tommy Toomey conceded his Tipperary U21 footballers will have to improve considerably to shock Cork in the EirGrid provincial decider.

Tipp stuttered to an eight-point win over Clare at Semple Stadium last night as Jason Lonergan struck five points from play. Tipp did have nine different scorers on a chilly night, but much of their play was disjointed and only in the closing minutes did they really look like clicking into top gear.

Clare brought a dogged challenge to Thurles and travelled with a quarter-final win over Waterford under their belts. But the Banner boys failed to score from play in the first-half as Tipp led 0-7 to 0-4 at the break in front of 640 spectators.

Tipp had seven scorers in the first-half but were lucky not to concede a goal in the 20th minute when Martin O’Leary rattled the town end crossbar. It was a night when both goalkeepers preserved clean sheets and Clare’s Killian Normoyle can be pleased with his efforts. The Lissycasey man denied John McGrath in the first half and kept out sub Gerry Cronin with a blinding save at the death.

Otherwise, this was a low-key affair as Tipp did enough to get over the line and set up a third successive final meeting with Cork, chasing five-in-a-row in the province. Senior men Liam Casey, Steven O’Brien, Colin O’Riordan and Ian Fahey all got on the scoresheet, with O’Riordan on target after just 31 seconds, and Tipp will need this quartet firing on all cylinders in under three weeks.

But it was Lonergan who grabbed the headlines with five classy scores to cap a hard-running display. Toomey reflected: “We saw them (Clare) playing Waterford and we knew it was going to be a war of attrition – and it was. And it took us a long time to get on top of them.”

Tipp were 0-3 to 0-0 clear within four minutes and 0-5 to 0-1 up with less than 18 minutes on the watch. And while Clare didn’t score from play until Jamie Malone registered in the 34th minute, Tipp couldn’t afford to breathe easily until the final minutes when a flurry of scores arrived.

Toomey admitted: “Not everything went right but we’re in a final and that helps. Cork won’t be too worried about our display today but the final will be a different game.”

Toomey added: “It was our full forward line’s first time to play together and a number of lads haven’t been with us. You have to take those circumstances into account. Sometimes when you have a game under your belt, your next game will be better. Our game will have to be better to be competitive in the final – there’s no doubt about that.”

Adults: €10.00
Students/OAP’s: €5 tickets on the gate or receive a €5 concession on Adult €10 tickets bought at designated turnstile prior to entry.
Under 16s are free and not required to have a ticket to attend this game.

This fixture is unreserved. Tickets are available to purchase in advance at selected Centra & Supervalu stores.

The Tipperary U21 Football team to play Clare this Wednesday night in Semple Stadium at 7.30pm, in the Eirgrid Munster Under 21 Football Championship semi-final includes 5 of the starting line up that defeated Louth in the Allianz Football League on Sunday last, March 15th, in Drogheda plus John McGrath and Bill Maher from the Senior Hurling panel. The team is managed by Tommy Toomey of Arravale Rovers and he is assisted by the other selectors from the Tipperary Senior Football management team.