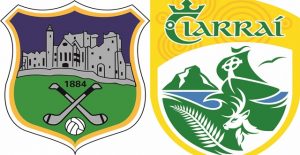 Kerry defeated Tipperary by 2-14 to 2-8 in the Munster Senior Football Championship Semi-Final on Sunday June 14th at Semple Stadium Thurles.

Eamonn Fitzmaurice’s Kerry beat Tipperary by six points in this afternoon’s Munster SFC semi-final, to set up a provincial showpiece with old rivals Cork on July 5.

Throw-in was delayed by 15 minutes as just the New Stand was open to punters attempting to gain access to Semple Stadium. When play got underway, Tipp led by 1-1 to 0-0 within four minutes, with two-goal hero Michael Quinlivan netting for the hosts. But Kerry came roaring back to led by 2-6 to 2-4 at half-time, Barry John Keane and Paul Geaney on target with goals before Quinlivan netted his second.

And a run of five successive points after half-time provided the platform for Kerry’s win, which sets up a Munster final clash with old rivals Cork on July 5. Kerry welcomed back Colm ‘Gooch’ Cooper after injury ruled him out of the entire 2014 campaign and the Dr. Crokes superstar scored three points, including two from play.

Tipp registered 13 wides to just five from Kerry and that was a crucial factor in their defeat. But the Premier County, beaten by 17 points in Killarney two years ago, did close the gap and look set for another good run in the qualifiers. Tipp’s U21 captain Colin O’Riordan started well but seemed to be hampered by injury as the game progressed. And another U21 star, Ian Fahey, was ruled out with a hamstring injury sustained during the warm-up.

This is an unreserved fixture and entry is via the O Riain (New) Stand only.

The Tipperary Senior Football team to contest their Munster Championship Semi-Final at 3.30pm on Sunday next June 14th against Kerry in Semple Stadium, Thurles has been announced.

Following on from their very impressive quarter-final display, manager Peter Creedon has elected to run with the same 15 that started the last day in what he hopes will be the side to derail the highly fancied Kerry outfit. It provides therefore a major boost to his Tipperary side with the news that Colin O’Riordan has been passed fit to start after his recent injury scare.

The team then is as follows –

The Kerry Senior Football Team to play Tipperary in the Munster Football Championship semi final in Thurles on Sunday contains just 7 of the team that started the All Ireland Final against Donegal last year.

All Stars, Paul Murphy and David Moran, miss the game due to injury while Brian Kelly, Aidan O’Mahony, Fionn Fitzgerald, Stephen O’Brien, James O’Donoghue and Donnchadh Walsh are all named in the substitutes list for Sunday’s game.

Of the six subs that saw action against Donegal last September, Shane Enright, Michael Geaney, Bryan Sheehan and Barry John Keane are all included in the starting fifteen this time round while Kieran O’Leary is injured and Declan O’Sullivan has since retired.

Jonathan Lyne of Killarney Legion makes his full Championship debut while Colm Cooper is named at centre forward for his 77th championship game and returns to championship action for the first time since the 2013 All Ireland semi final against Dublin.

The team, captained by Kieran Donaghy is as follows:

The following players are not available for selection due to injury:

This is the first senior inter-county championship game to be played in Páirc Uí Rinn.

The same 4 teams are in this year’s semi-finals as last year but last year it was Cork v Tipperary and Kerry v Clare.

Both semi-final referees come from Ulster – Joe McQuillan (Cavan) is in charge of Clare v Cork while Ciaran Branagan (Down) will referee Kerry v Tipperary.

In the Senior Football All Ireland Roll of Honour, Kerry are top with 37, 13 ahead of the next county – Dublin. Cork are 4th in the roll of honour with 7 titles. Tipperary have won 4 All-Ireland’s, their last in 1920 while Limerick won the first ever All-Ireland Senior Football Championship played in 1887 and also won the All-Ireland in 1896.