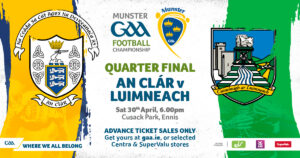 Limerick are through to the Munster Semi-Final after defeating Clare 4-1 on penalties in the Quarter Final of the Munster Senior Football Championship on Saturday April 30th at Cusack Park Ennis. The sides finished level after extra time on a scoreline of Limerick 2-16 Clare 1-19.

Penalty shoot-out glory for Limerick has secured the county a first Munster SFC win over Clare since 2009. It took a little bit of history to separate the sides with the first shoot-out in Munster Football Championship history deciding matters.

And with Kerry and Cork on the far side of the provincial draw, Limerick, having ended a run of five consecutive Munster championship defeats at the hands of Clare, will quietly fancy their chances of reaching a first Munster final since 2010.

Limerick surged three in front in this Munster quarter-final penalty shoot-out as each of their first three takers – Iain Corbett, Robbie Bourke, and Brian Donovan – found the net.

Cian O’Dea and Conor Jordan were off target with Clare’s first two and so it fell to Joe McGann to keep the Banner in the hunt with their third penalty, which he did, but it was game over when James Naughton made it four from four for Limerick.

Penalties were necessary following 20 minutes of extra-time fare that proved futile in separating the sides, matters deadlocked at 2-16 to 1-19 at the end of 90-plus minutes.

Where it was Limerick who brought proceedings to extra-time, it was Clare who dragged the game further into the evening as Eoin Cleary slotted a 91st minute free to restore parity.

Clare had held the upper hand during the first period of extra-time, with three Cleary points edging them two in front. The lead, however, was snatched from them in injury-time as Robbie Bourke collected a Brian Donovan pass and rattled the net.

Peter Nash’s second point of the evening upon the quick change of ends, moved Limerick two clear, but two Banner frees, from sub Brendan Rouine and Cleary, levelled matters for the fifth occasion.

Clare half-back Jamie Malone looked to have clinched the win for the home side when landing a 75th minute point, but despite the fourth official having signalled for four minutes of injury-time, play continued on for another two minutes, at the end of which Bourke held his nerve to send the quarter-final to extra-time.

As well as not getting the job done in extra-time, Clare will have been most annoyed at their failure to take the lead before the fifth minute of injury-time given their grip on proceedings from around the 50th minute mark onward.

Across the remaining 27 minutes of action, Clare outscored their guests by 0-5 to 0-2. They also, however, kicked three wides, dropped two more short, and had an outstanding goal chance saved during this period of unfulfilled ascendency.

The same as their Division 3 League final appearance, Limerick faded in the final quarter as legs and minds grew heavy, but unlike the defeat to Louth, they were not punished on this occasion.

Capturing the extent to which Limerick’s graph dipped after Peter Nash’s 48th minute point sent them 1-12 to 1-9 clear, the Treatymen only managed one point in the almost half an hour between this and Bourke’s 77th minute levelling free.

The visitors had taken a three-point lead with them into the second-half, their 1-9 to 1-6 interval advantage stemming from a nine minute spell at the beginning of the second quarter where Billy Lee’s side kicked 1-4 without reply.

It was a period of dominance that meant Limerick, despite not hitting the front for the first time until the 23rd minute, were five to the good – 1-7 to 0-5 – on 28 minutes.

Half-forward Adrian Enright, midfielder Cillian Fahy, centre-forward Brian Donovan, and full-forward Josh Ryan landed four points on the bounce before full-back Brian Fanning succeeded in carrying the ball from his own 65-metre line all the way to the Clare net for an early contender for goal of the championship.

Fanning had burned Clare corner-forward Gavin Cooney on his long and scorching run to the Clare goal, but Cooney made amends when drawing the foul for a 34th minute Clare penalty that the evergreen David Turbridy clinically tucked away.

At the other end, Clare midfielder Ciaran Russell’s marshalling of the D meant Limerick initially found it difficult to feed Josh Ryan, but an injection of pace in their transition play as the half wore on allowed the Treaty find the towering Oola man with more regularity – he finished the half with three frees and one from play.

As it transpired, this Munster quarter-final was only warming up. 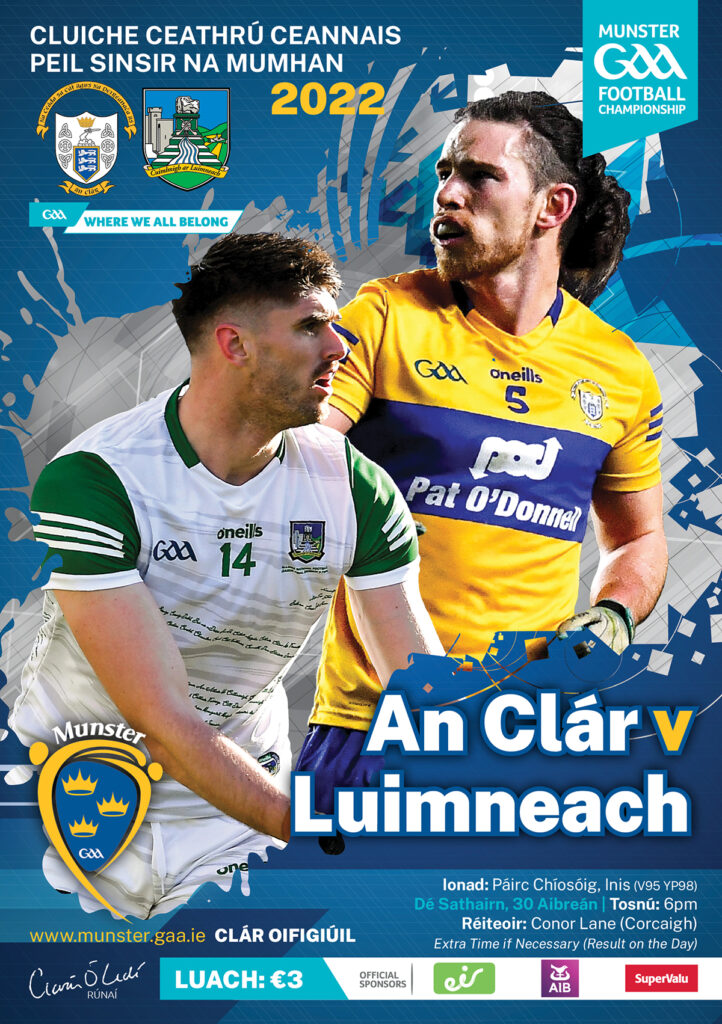