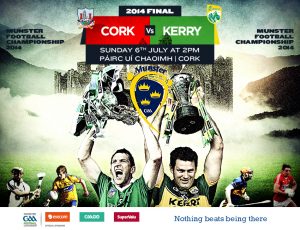 It was a close-run thing, but ultimately Cork did just about enough to secure a passage to the Munster final as they saw off Tipperary at Páirc Uí Chaoimh on Saturday evening.

With the game about to move into injury time, Tipp led by 1-11 to 0-13, but Cork sub Aidan Walsh kicked three consecutive points before Barry O’Driscoll assured them of victory. Despite being strong pre-match favourites, however, there was never really a stage when Cork lived up to that billing. Even though Daniel Goulding put them ahead with a second-minute free, Tipp set their tone as Peter Acheson and Conor Sweeney pointed to put them in front and by the 11th minute they led by 0-5 to 0-2, an advantage which should arguably have been greater.

Cork looked to have found some rhythm as they then reeled off five unanswered points, with Mark Collins, John Hayes and Paul Kerrigan all impressing while Goulding converted a pair of frees and Tipp struggled to make any real headway. They never panicked, however, and an excellent Steven O’Brien effort was added to by a free from Conor Sweeney to tie matters at 0-7 each. Again, Cork pushed on as Mark Collins and Fintan Goold both scored and Hayes should have put them five points clear but his goal attempt after an incisive move was somehow kept off the line by Acheson. That was in the 35th minute, but it was Tipp who went in leading at half-time as O’Brien arrowed a ball from midfield into Sweeney’s hands and he slotted past Ken O’Halloran in the Cork goal.

Despite Cork having introduced Aidan Walsh and Eoin Cadogan by the start of the second half, there was no discernible change in the pattern of the game, as Sweeney ensured that any home scores were responded to in kind by the visitors. As the second half wore on, however, Tipp became paralysed at the prospect of a first championship win over Cork since 1944, despite the fact that the hosts were struggling in a big way themselves. Though sub Colm O’Neill kicked two points for Cork to bring them back to within a point, 1-10 to 0-12, a Tipp replacement, Brian Mulvihill, put them two ahead again. Walsh would have the final say, though.
***
Scorers for Cork: D Goulding (0-3f), A Walsh 0-3 each, M Collins, C O’Neill (0-2f), B O’Driscoll 0-2 each, B Hurley (0-1f), J Hayes, P Kerrigan, F Goold 0-1 each.

Next Round – the winners play Clare or Kerry in the Munster final on Sunday July 6th.

The Tipperary Senior Football team to play Cork in tomorrow’s Munster Semi-Final at 7:00pm in Pairc Ui Chaoimh shows 1 change from the side which defeated Limerick in the Quarter-Final.

John Coghlan comes in to the side at corner-back in place of Ger Mulhair.

General Admission – €15
Students and OAP’s – purchase a full price ticket and receive a concession at the designated stile with valid ID,
Under 16s free
Visit gaa.tickets.ie to purchase tickets online

The Cork Senior & Junior Football teams for Saturday's games will be announced on http://t.co/5028wyNoqk on Thursday #CorkGAA14

This year’s quarter final draw between Clare and Waterford was the first drawn game in the Munster senior football championship since 2010 when Cork and Kerry drew 0-15 each in the semi-final at Fitzgerald Stadium on June 6th. Kerry won the replay by 1-15 to 1-14.

This year’s semi-final pairings are a bit of a novelty as Cork and Tipperary last met in the Munster championship in 2007 and Kerry and Clare last met in Munster in 2008, although they did meet in the 2012 qualifiers when Kerry won by 2-22 to 1-6.

Tipperary last qualified for the Munster senior football final in 2002 where they lost to Cork in a replay by 1-23 to 0-7.