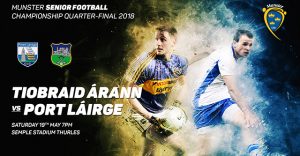 Tipperary defeated Waterford by 0-20 to 0-9 in the Munster GAA Football Senior Championship Quarter-Final on Saturday May 19th at Semple Stadium Thurles.

Tipperary advanced to a Munster SFC semi-final date with Cork next Saturday after scoring a deserved victory over Waterford at Semple Stadium in Thurles.

Liam Kearns’ men were always on top during the contest and pulled away after the interval with a string of points. Waterford, in fairness, never gave up and rallied in the final quarter, but it was a matter of closing the gap rather than staging a comeback which would trouble the home side.

Tipperary led by 0-6 to 0-0 before Gavin Crotty finally opened the Waterford’s account in th 28th minute. That score lifted Waterford and they got some hope when Tommy Prendergast landed two excellent points from play before the break. It left Waterford trailing by 0-7 to 0-3 at half-time but Tipperary took charge after the restart.

They upped a gear and with Liam McGrath leading the way, they struck for six points in a blistering 11 minute spell. Michael Quinlivan fisted two efforts, McGrath struck a free and one from play and Kevin O’Halloran got his second point of the game with another fine effort.

Points from Liam Boland and Josh Keane pushed the lead out to 0-15 to 0-3 after 50 minutes and a landslide victory looked on the cards. Jason Lonergan and Philip Austin extended Tipperary’s lead, but Waterford battled to the end.

Jason Curry landed a sideline from the left for an excellent point and he also got a free, with Conor Murray and Hutchinson also finding the range for a battling Waterford side.

Tipperary continued to pick off good scores right to the end and while they never looked like finding the net, the Premier County landed enough points to ease to victory.

The @WaterfordGAA Senior Football Team to face @TipperaryGAA tomorrow night was named tonight. Best of luck to Tom McGlinchey and all his panel! ⚪️🔵⚪️🔵 pic.twitter.com/vAJAbQvhGM