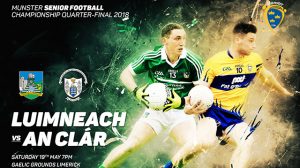 Clare defeated Limerick by 1-23 to 0-14 in the Munster GAA Football Senior Championship Quarter-Final on Saturday May 19th at the Gaelic Grounds Limerick.

Kieran Malone was the star of the day for @GaaClare as they overcame @LimerickCLG in the @MunsterGAA SFC at Gaelic Grounds! GAANOW have the round-up for you here! pic.twitter.com/GypvxE4hhh

Report By Declan Rooney at the Gaelic Grounds

Clare will meet Kerry in the Munster football semi-final after the brilliant Kieran Malone led them to the win over Limerick at the Gaelic Grounds.

Limerick were well behind after the first quarter, but with Danny Neville and Jamie Lee in form they only trailed by five at the break, but after Eimhin Courtney settled Clare, six points from five substitutes helped Clare over the finish line with ease.

Eoin Cleary curled over a lovely score after three minutes to start the scoring, and his forward colleagues Keelan Sexton and David Tubridy soon matched his tally to make it 0-3 to 0-0 after five minutes.

A foul on Jamie Lee allowed Sean McSweeney to get Limerick on the board, but Clare’s response was emphatic as Pearse Lillis, Jamie Malone and Cleary all found the target again – and only a great save from Donal O’Sullivan denied Kieran Malone a goal.

But the Limerick defence was being carved open too easily, and after 18 minutes Kieran Malone exchanged passes with Jamie Malone, and Kieran round the net after his initial effort was well saved by O’Sullivan.

With Gary Brennan and Cathal O’Connor in control at midfield Clare were well on top at that stage, but to their credit Limerick responded with a couple of good scores as Jamie Lee and Danny Neville struck to trim the gap to six points.

A third Cleary score looked to have restored the natural order of the half nine minutes from the break, but with Lee and Neville instrumental, Limerick kept in touch.

A free from McSweeney saw them hit back straight away, before Lee and Neville pointed again, which was followed by a great Paul White score to put a goal between the sides after 28 minutes.

A great stop from Eamonn Tubridy halted Limerick’s run five minutes from the break, as points from Kieran Malone and David Tubridy, put Clare 1-9 to 0-7 ahead at half-time.

A foul and some dissent from Eoghan Collins allowed Lee to close the gap to four points early in the second-half, and by the 40thminute McSweeney pointed to put just a goal between the sides.

But Clare finally found their feet again after 13 barren minutes. Eimhin Courtney landed a great score, which was followed by four more unanswered points for Clare, with two of them coming from Cleary. From there to the end it was a canter for Clare as substitute Gearoid O’Brien and Kerian Malone landed efforts in a 12 point win.

This is an unreserved seating fixture.

Limerick SF Team v Clare this evening in the Gaelic Grounds @ 7pm. The very best of luck to all involved. Come out and support the lads pic.twitter.com/ew7HYntOi5