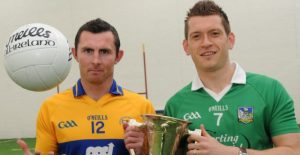 Clare stumbled across the line with two late David Tubridy scores as they almost threw away a nine-point lead at the Gaelic Grounds. Ian Ryan looked to have been the hero for Limerick with eight second-half points but Clare showed great character to recover from a desperate second-half and reach the provincial decider. Looking for their first Munster final spot in 12 years Clare blasted into the Limerick challenge in the opening 10 minutes, looking more like the team with a championship win already to their name.

Micheal McDermott’s side kicked five points before Limerick hit the target after 15 minutes. In the 23rd minute centre-back Gordan Kelly ran onto a pin-point pass from Shane McGrath, carried from the 45m line and blasted past Brian Scanlon from the edge of the large rectangle for a great Clare goal and a 1-9 to 0-3 lead at the break. Limerick came roaring back in the second-half, inspired by Ryan, and when they edged ahead on 66 minutes Clare looked to have squandered a golden opportunity. Tubridy had other ideas however and the Banner advance to a rare Munster final appearance.

Clare sealed a place in the Munster GAA Football Championship final with a dramatic victory over Limerick in the Gaelic Grounds on Saturday evening. In an incredible contest, Clare threw away a 10 point lead to let Limerick back into a game they had looked to have absolutely no chance of winning, when early in the second half they trailed by a huge margin. Clare had been 1-9 to 0-3 ahead at half-time, but Limerick produced a brilliant second half performance, and led by Ian Ryan, who hit 0-10, took the lead with just four minutes left.

However, after hitting just two points in the second half up until those dying moments, Clare somehow recovered their composure and hit two late points through David Tubridy to nab the win and break Limerick hearts. The first half belonged to Clare, and Limerick had no answer to their dominance in the opening 35 minutes. They raced into a 0-5 to 0-0 lead within 10 minutes, Rory Donnelly, Shane McGrath and David Tubridy among their scorers in that exciting opening patch. Limerick looked to have recovered from their poor start when they hit three in a row, Ryan hitting two of them with one of his efforts a superb score fashioned off a wonderful pass from Ian Corbett.

However, midway through the half Clare took over again and two well-taken points from Donnelly were followed by a goal from the Banner men which put them seven ahead. Gordon Kelly got the major, his shot deflecting in past Limerick goalkeeper Brian Scanlon. That made it 1-7 to 0-3 and further scores before the interval from Tubridy and Alan Clohessy left a huge gap of nine in it. Clare hit the first score after the restart as well to go 10 ahead, but then Limerick finally found their groove after that dreadful first half display. They hit six unanswered points between the 37th and 52nd minutes to come right back at Clare, who were unravelling under the Treaty onslaught.

Seamus O’Carroll and Stephen Kelly got the first two, then Ryan knocked over four in a row, three of them frees. Tubridy stopped the rot for Clare with a point on 55 minutes, but Limerick scores followed swiftly from Ger Collins and Ryan to leave just a goal in it with 10 minutes left. By now, Limerick were playing brilliantly, and this time it was Clare who had no answer as scores from Eoghan O’Connor and Ryan (2), incredibly, brought Limerick level.

Ryan then sailed over his tenth point to put Limerick ahead for the first time with less than five minutes to go but inevitably, after such a dramatic game, there was a sting in the tail. Having come back from 10 behind, Limerick were now seemingly set for the most famous of victories but Clare rallied in the dying minutes, and grabbed a win which they looked to have thrown away. Tubridy was their hero, hitting two points, the second in injury time, to send Clare into their first Munster GAA Football Championship final since 2000.

Iain Corbett aged 19 makes his first champion start having come on as a substitute in the first round game V Waterford last month, he replaces Eoin Barry. Stephen Kelly who was also a substitute in the Waterford game has recovered from injury and starts in place of Eoghan O’Connor. There are no other changes. Ger Collins (Monaleen) is the team captain.

2006 – Limerick 2-5 Clare 0-8 (Quarter-Final at Limerick) – first half goals by Michael Crowley and John Galvin helped Limerick to defeat a wasteful Clare side who kicked 15 wides.

Clare’s last victory over Limerick in the Munster Senior Football Championship came on June 3rd 1984 at the Gaelic Grounds Limerick on a scoreline of 2-5 to 0-10, a replay after the sides drew at Semple Stadium Thurles a week earlier.

Between 1909 and 1980, Limerick recorded just 1 victory over Clare in the Munster Football Championship – a run spanning 19 matches during which there were 3 draws and 15 victories for Clare.

Clare have won 1 of their last 7 matches in the Munster Senior Football Championship, a 0-9 to 0-7 victory over Waterford at Cusack Park Ennis in May 2008.