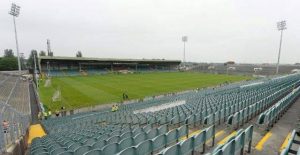 Kerry defeated Limerick by 3-13 to 2-12 after extra time in the McGrath Cup Football Final on Sunday January 22nd at the Gaelic Grounds Limerick.

By Jackie Cahill at the Gaelic Grounds for GAA.ie

Kerry claimed their fifth McGrath Cup title win this afternoon but were made to work hard for it by a dogged Limerick outfit at the Gaelic Grounds.

The Kingdom needed extra-time before winning the competition for the first time since 2013 – as sub Conor Geaney’s late goal sealed the win in front of 2,010 spectators.

The sides were level at 1-11 apiece after 70 minutes as Geaney looked to have won it for Kerry with a free before Sean O’Dea, in the fourth minute of stoppage time, ensured two extra 10-minute periods.

The sides traded goals in the first period of extra-time as Barry O’Sullivan netted within 20 seconds of the restart, that Kerry goal cancelled out by Limerick captain Iain Corbett’s goal from a penalty in the 73rd minute, awarded for Shane Enright’s foul on Danny Neville.

As the teams turned around, Kerry led by 2-13 to 2-12 and Geaney’s well-taken goal, set up by a precise Conor Keane pass, put the end result beyond any doubt.

Geaney was brought on as a 65th minute substitute for former Footballer of the Year James O’Donoghue, who limped off with a foot injury.

Kerry also lost Paul Murphy and Gavin Crowley to injury during the game, but manager Eamonn Fitzmaurice indicated after the game that he’s confident that the problems won’t be of a long-term nature, as his charges look ahead to their opening League fixture with Donegal in a fortnight’s time.

For Limerick, who will operate in Allianz Football League Division 4 this season, this was an encouraging outing. They went toe to toe with their much-vaunted opponents for the entire game and despite falling six points behind in the first half and again early in the second, the Shannonsiders worked their way back into contention.

David Moran’s goal for Kerry approaching half-time opened up a 1-6 to 0-3 buffer, but Sean McSweeney’s free cut the interval deficit back to five, Limerick trailing by 0-4 to 1-6.

Ahead by 1-8 to 0-5 when O’Donoghue converted a 39th-minute free, Kerry looked in a good position but Limerick registered 1-3 without reply to draw level.

Seamus O’Carroll’s 53rd minute goal levelled matters, but crucially, Limerick could never get ahead as the sides were deadlocked on three further occasions down the home straight.

Chances came and went at both ends in a frantic finish before Geaney nailed a 69th minute free to put Kerry ahead. O’Dea showed real initiative to bomb forward from defence for an equaliser, but Kerry did enough in extra-time to lift early-season silverware.

Killian Young, Kerry captain holds up the McGrath Cup after his team beat Limerick in the Final at the Gaelic Grounds. pic.twitter.com/mjNa8uVNg1

Limerick senior football manager Billy Lee has named his team to face Kerry in the Munster McGrath Cup final against Kerry. Following victories over Clare and Waterford in earlier rounds the management team of Billy Lee, Paudie Kissane, Brian Begley and Ricky Ronayne has released the following team and panel for Sunday’s game in the Gaelic Grounds at 3pm.