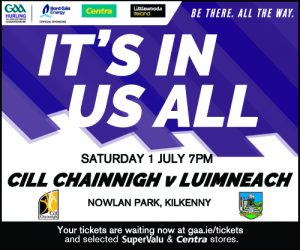 Kilkenny defeated Limerick by 0-20 to 0-17 in the GAA Hurling All-Ireland Senior Championship Round 1 on Saturday July 1st at Nowlan Park Kilkenny.

They had a real battle, but Kilkenny held off a strong challenge from Limerick to advance to Round Two.

Brian Cody’s Cats worked hard over the 70 minutes to shake off a dogged Limerick at a sunny Nowlan Park on Saturday evening.

The opening half was a slow-burner, as both sides found it hard to find their rhythm in a stop-start affair. Limerick started with the wind, but couldn’t make it work in their favour – they shot 13 wides in the first half alone.

Kilkenny made a bright start, a Paddy Deegan point coming in between two T.J. Reid frees, but Limerick weren’t about to let them get far ahead. By the 18th minute there was just a point between the sides, Gearoid Hegarty finishing a good move involving Kyle Hayes and Peter Casey to leave the Treaty County breathing down Kilkenny’s necks (0-4 to 0-3).

Goal chances were few and far between in the opening half, but Reid almost went close to nabbing one when a low Michael Fennelly pass broke his way.

The roles were reversed on 23 minutes, when Fennelly tried a one-handed shot after dashing on to Reid’s defence-splitting pass, but his shot was straight at goalkeeper Nickie Quaid who stopped the shot, then reacted well to prevent the sliotar from spilling back over the line.

The Cats grew in confidence as the half wore on, helped in no small way by the hard work of Fennelly, Deegan, and Walter Walsh. The Tullogher man enjoyed a purple patch in the second quarter, scoring three good points as Kilkenny stretched into a three-point lead (0-8 to 0-5) by the 33rd minute.

However, they couldn’t shake off Limerick for long. With Hayes and Shane Dowling in good form, the Treaty men got to within two points at the break (0-10 to 0-8).

Limerick were quicker out of the traps in the second half, and with Peter Casey leading the way they took the game to Kilkenny. They were on level terms by the 44th minute, but found themselves chasing the game again when Kevin Kelly (two), Lester Ryan and Walter Walsh fired the Cats into a five-point lead by the 64th minute.