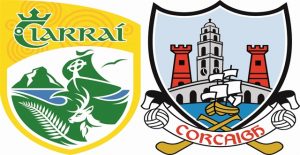 Kerry defeated Cork by 0-16 to 1-12 in the Electric Ireland Munster Minor Football Championship Semi-Final on Wednesday May 13th at Austin Stack Park Tralee.

An extremely tight game in Austin Stack Park, Tralee finished level after normal-time, 0-11 apiece, and Daniel Ó Duinnín’s late goal in extra-time levelled the match for Cork, with a replay looking certain. However, having been the better side in the extra period, Kerry took the initiative in the closing stages and Jack O’Connor’s side keep their bid for successive titles on track. They will face Tipperary in the Munster final on July 5.

Kerry led 0-9 to 0-7 at half-time, with freetaker Cormac Linnane, Ronan Buckley, Mark O’Connor and Seán O’Shea among their scorers.
The accuracy of Stephen Sherlock’s frees kept Cork in it in the first half, but Kerry edged three clear by the midway point of the second half after scores from Conor Geaney and Linnane. However, Cork hit three points without reply in the final quarter, from Daniel Ó Duinnín, Stephen Leonard and Shane Kingston to take the game to extra time.

Kerry took control in the first period of extra-time, with a point from Graham O’Sullivan and two from Geaney leaving them three clear at the mini-interval. That remained the difference as time ticked away in the second half of extra-time, but the impressive Daniel Ó Duinnín’s goal after 76 minutes levelled things up dramatically for Cork and created the prospect of a replay. However, Kerry found the score they needed to advance.

By Tony Leen, Tralee for the Irish Examiner newspaper

A breathless antidote in Tralee Wednesday night to some of the forensics football’s been subjected to of late. Evidently the tedium of defensive formations and bodied rearguards hasn’t trickled down to the minor football rivalry between Cork and Kerry. The Kingdom, reigning All-Ireland champions, emerged victorious with a point from Spa’s Mike Foley in the last minute of extra-time, separating these old rivals and prematurely ending the Rebels’ interest in this season’s minor championship.

Harsh? On Cork yes. But when Kerry coach Jack O’Connor used the words ‘tenacity’ and ‘character’ about his players in the winning dressing room afterwards, it wasn’t for effect or a punchline. From full-back Jason Foley through to centre back Mike Breen, immense midfielders Mark O’Connor and John Mark Foley, Brian O Seanachain and the other forwards who were out on their feet at the death, Kerry truly quarried this epic win from deep..

Cork were advertised as a better group of individual players, and that may remain fact. Their coach Donal O’Sullivan felt afterwards that a couple of rushed passes and individual errors cost them in extra time, but it was hard not to feel sorry for the visitors to Tralee.

The goal that Cork threatened at various intervals came with a minute and a half to go in extra-time from the ever dangerous Dan O Duinnin, who was by now plying his trade on the edge of the square. He finished brilliantly and if there was to be a winner at this late juncture, it looked like the visitors. But Kerry created one last attack, and despite wasting other chances in the second period of extra time, there was no mistake this time from Foley, set up by the inspirational Mike Breen.

The significance of these minor turf wars can be overstated at times, but because it came at the semi final stage of the provincial series, the losers’ season is over. A thrilling throwback to one the clifftop championship. The pity for Cork is that this team would only have improved.

Kerry certainly will, if only because this victory, and its’ manner, will nourish their preparations for a Munster final against Tipperary. Jack O’Connor said the dogs on the street knew that Kerry don’t have the lethal forwards of the 2014 campaign, but they still have midfielder Mark O’Connor, and emerging talents like Brian O Seanachain, Sean O’Shea and Conor Geaney. This battle will gird them.

With 15 minutes remaining, Kerry were 0-11 to 0-8 to the good but Cork were in the ascendancy, claimed the last two scores of normal time from Stephen Leonard and Gary Murphy to force extra time. Their second half display merited it. From the outset, both inside forward lines were causing headaches for the opposition but neither rearguard wilted. Though Cork had more options inside with Leonard, Sherlock and Murphy, Kerry’s Conor Geaney and Stephen O’Sullivan were also a handful in the opening exchanges.

The sides were level at 0-5 each after 17 minutes when Kerry’s Gavin White powered forward with intent to fist the equaliser. The rangy Kerry wing forward Brian O Seanachain drilled a superb ball into Stephen O’Sullivan to add a further point, and showed his prowess in the air too by fielding a high centre before being fouled. Conor Geaney converted the free to make it 0-8 to 0-6 for Kerry.

Their keeper, Billy Courtney, opened a three point gap from a 45 but the ever dangerous Stephen Leonard – who impressed for Ilen Rovers in their recent Cork SFC loss to Nemo Rangers – narrowed the gap to 0-9 to 0-7 on the stroke of half-time.

With Kerry playing into the strond wind in the second period, their ambition lessened into possession maintenance. But Cork could only add a single point, from Dan O Duinnin, in the opening 23 minutes of the second half with the assistance of the elements. In hindsight it was possibly their undoing.

They forced extra time and though Cathal O’Rourke cancelled Sean O’Shea’s early point for Kerry, the Kingdom looked set for home when Graham O’Sullivan and two Conor Geaney points out them three up. Cork weren’t done though and when O Duinnin goaled, they must have thought they’d done enough to earn a replay in Cork. Not quite.

Adults: €10
Juveniles do not require a ticket
Concession tickets are available on match day at the venue only.
This is an unreserved fixture.

The Cork Minor Football team lines out as follows:

Next Round – the winners play the winners of the Clare v Tipperary semi-final in the Munster Final on July 5th.

Tipperary and Clare will also meet in this year’s Munster Minor Hurling Championship semi-final which like the football semi-final will be played at Semple Stadium.

Goals win games or do they? Limerick and Waterford scored 4 goals each in this year’s Munster Minor Football championship but both are now eliminated while Clare (2), Cork (2), Tipperary (2) and Kerry (0) remain in the competition.